An Obituary: The Life of an Unfortunate Tree

By Doug Coffey, Fairfax Master Gardener Intern
The white oak tree in my backyard must have been nearly 200 years old. It was a tree that would have been present through much of our history as a Nation, and I enjoyed sitting under its shade throughout the summer.

It was massive, shading the house and the patio area, the drip line stretching perhaps 150 feet across. You’ll notice that I’m writing in the past tense. Even though the average life span for Quercus alba is 300 years, this oak was already in trouble when I became its caretaker, as will become clear.

But first, a little history about trees in America.
Since the beginning of our Nation, it seems that we’ve had a love/hate relationship with trees. At first, we chopped down virgin forests out of fear of dark places and to create small places for subsistence and shelter. Then for the next 350 years cutting down trees was mainly for economic reasons; lumber was big business.

By the mid-20th century, our motives shifted from utility to aesthetic as we began developing suburbs. The most expedient way to create housing developments that ring major metropolitan areas was to bulldoze vast tracts of woodlands, farmland and otherwise undeveloped land and throw up house after house. As each community was built, it was common practice among builders to plunk down a scrawny sapling in the front yard. In many developed communities, you might see an elm tree, or a maple or an oak, aligned down each side of the street.

The other distinguishing characteristic of these neighborhoods was a verdant swath that connected all of the properties from one neighborhood to the next, one town to the next and so forth across the country. These lawns would become competitors with the trees for the limited nutrients and rainwater or sprinklers that would follow. 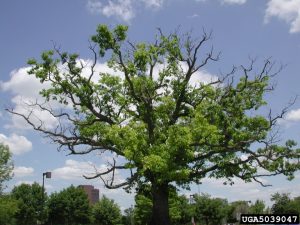 In older neighborhoods, trees grew up, filling the space allowed for them. The more ambitious of us chose to plant additional trees; accent trees, specimen trees, trees for shade, trees for color or trees for fruit. More progressive communities incorporated “green spaces” into their residential spaces, and the unintended consequence was a growing competition between trees and lawn.

My oak tree, for the first 150 years of its life, did just fine. It was in the woods among other trees, then in farmland, originally part of Lord Fairfax’s holdings. The land was likely planted in tobacco, the dominant crop in the region until the mid-1800s.

Even after the Civil War and after significant commercialization and population build up in Fairfax County, the area around my tree was still considered rural. Then post World War II, suburbia started encroaching. The farmland was converted into housing. Land was cleared and leveled for houses, changing the natural surface run-off that provided needed water to support the tree. Streets were laid out and then paved, covering over the outer edges of the root spread of my oak tree. In the early 1960s my house was built within 30 feet of the tree along with driveways and sidewalks, a detached garage and a retaining wall.

Each area, covered with impermeable buildings, concrete, asphalt and stone, starved the oak of air, water and the nutrition it needed to remain strong and healthy. They covered over the tree roots in the top 6 inches of soil that often extend out two to three times the width of the tree drip line.

Established trees will try hard to overcome such intrusive assaults on their well-being. But periods of drought, early and late frosts and wide fluctuations in temperature can reduce tree vigor and allow secondary diseases and insects to cause further decline or death of branches, roots or sometimes entire trees.

I could see the crown was thinning out, leaves were prematurely dropping and dieback was affecting branches on the side of the tree most encroached upon.

The weakened tree then became an easy target for insect infestations such as the two-lined chestnut borer. After spending a small fortune to have an arborist aerate the root system, fertilize and treat for borer infestation and trim out dead branches, I had to give up. The arborist guessed there may be a couple of more years before the tree would be too far gone. Shortly after that prognosis, I sold my home and said goodbye to the oak tree. The new owner decided it was not worth saving and had the tree taken down within days of moving in.

While we sometimes make it challenging for a mature tree to survive, we can make it even more difficult for a newly planted tree to thrive. Part 2 will highlight some common mistakes we make when planting a new tree. Some mistakes are the same as we make with a mature tree.