Enjoying What Comes Over and Under the Fence 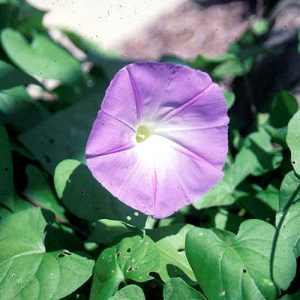 In townhouse gardening, I am limited by space. However, I can choose labor-free enjoyment of the plantings in my neighbors’ yards. Sometimes things hop over or under the fence to join my garden.

Last year my neighbor planted morning glories (Ipomoea purpurea) on her fence. These are the deep purple-colored ones. I noticed in the fall that the seeds were dropping where I had wanted to grow something else on my side. I decided to let nature take its course rather than face a lot of weeding. 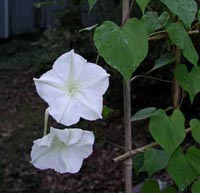 In previous years, she planted moonflowers (Ipomoea alba) in this space, which bloom at night. Both moonflowers and morning glory have slender twining stems. Ipomoea comes from the Latin prefix ‘ip’ meaning worm and ‘homolas’ which means like. So, this beautiful flower was named after its worm-like growth habit.

Although these moonflowers remind me of Georgia O’Keeffe’s “Jimson Weed” painting, Jimson weed is from the nightshade family, Datura stramonium. It’s also called Jamestown weed and is poisonous if ingested. 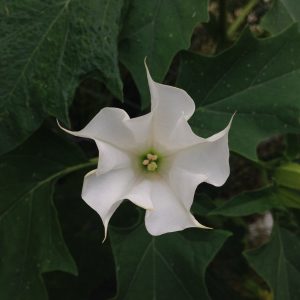 The first New World observations of this plant come from stories in Jamestown in colonial Virginia, where it was added to a stew by British soldiers who had come to quash a rebellion. They hallucinated for days. O’Keeffe painted her painting in 1936, on commission for Elizabeth Arden salon in New York, and the painting sold for $44 million at auction.

Last year I was admiring my neighbor’s wood poppies, Stylophorum diphyllum, and she explained that they are native plants. This year, they crawled under the fence and have now established themselves on my side. They were vigorous enough to compete with the daylilies. I enjoy their intricately-shaped leaves. 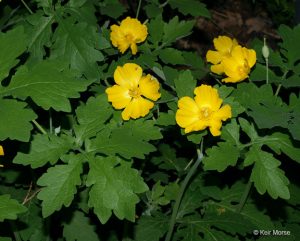 Another neighbor’s Japanese maple reminds me of the character Wilson in the “Home Improvement” TV sitcom; you never see him except from the eyes up.

I received a gift of a Rose of Sharon tree seedling last year. After planting it, I read that they grow into trees, and I have plenty of trees and no room for others. In the late fall, I put it in a pot, kept it in the protected micro-climate of the corner between my shed and the house, and it came back vigorously this summer. It grew tall enough to peek in my kitchen window, surprising me one day, as I wondered who had left me a plant! 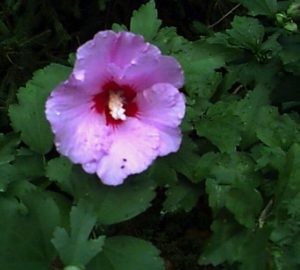 A couple of Joe Pye weeds always establish themselves somewhere in my yard every year. As it’s a native plant and gives seed for the birds, I leave one per year. During my first year of gardening, I wondered what the noxious looking weed was with the spotted stem but interesting looking leaves.