Who Is The Patron Saint of Gardeners?

By George Graine, Fairfax Master Gardener
“I think most people assume he’s a Saint Francis with a spade. He’s more of a saint for aficionados.”
—Peter Cilioz, Campania International

While sales at the yard art section of many garden centers lead you to believe that Saint Francis of Assisi is the most popular statue in home gardens, he is not actually our champion. Perhaps the birds depicted on this statue symbolize freedom, and it is suggested that animals should have the ability to roam wherever they please. But these concepts are not completely garden worthy. Few people seem to know that our revered champion is Saint Fiacre. Who is this holy man who is also the patron saint of gardeners? Before I answer this question, let me caution you not to expect this saint to displace the famous swashbuckling Irish Saint Patrick. No parades, no green beer or other forms of revelry will happen to honor Saint Fiacre, at least not in America. Saint Fiacre was born near the end of the sixth century, a good five hundred years before Saint Francis. Make no mistake about it, Saint Fiacre is the true patron saint of gardeners and was recognized as such in Europe since the middle Ages.

A very brief history of Saint Fiacre is in order before the legend, that is, the miracle leading to Fiacre’s sainthood. His father was a warrior and as such was often away from home. Although Fiacre was devoted to his mother, unfortunately she passed when he was a teenager. This experience must have set him on the path to become a holy man leading a reclusive life of a monk in solitude. Having been raised in a monastery he developed an abiding love of science, the joy of plants including healing herbs as well as an appreciation of nature. Eventually Fiacre left the green of Ireland for France where he established a hermitage in a cave near a spring. When he asked Bishop Faro of Meaux, France for some land in order to grow food crops and herbs for healing, the Bishop granted his request. 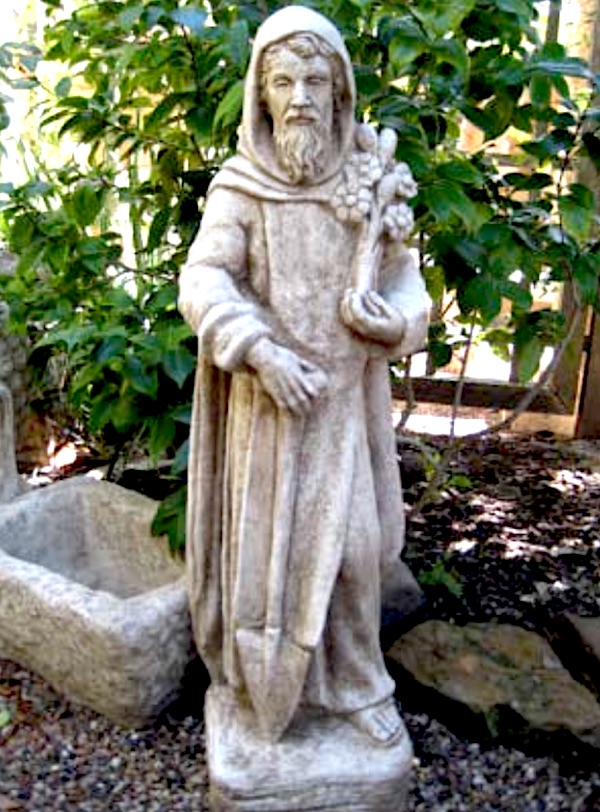 The deal was struck. Fiacre could have as much land as he could entrench in a single day from sunup to sundown. Praying on this proposition, the next day Fiacre dragged the point of his staff (spade?) across the ground and the earth turned as he went, toppling trees and shrubs, digging up briars and weeds, and stones moved to prepare the land for a garden of medicinal herbs, flowers, seeds and other plant material. This is the legend (miracle?)! In time Fiacre built a chapel in honor of the Holy Virgin, a house where he lived a