Story of the Annabelle Hydrangea 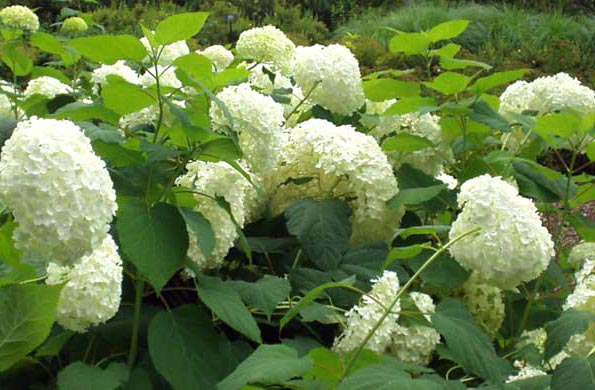 Almost everyone has seen or grown the Annabelle hydrangea (Hydrangea arborescens). So I want to present some interesting facts about this common plant — some things most people do not know — like “who was Annabelle?”

Obtained three years ago as a wee baby from some landscape architect friends, my Annabelle hydrangea was planted on the shady side of the backyard fence. I was filling in the areas along the fence. Having no plan or consideration, I was taking contributions of anything that grows. Backwards to most logical thinking, my gardener’s brain thinks: first get a plant, then find a place for it. 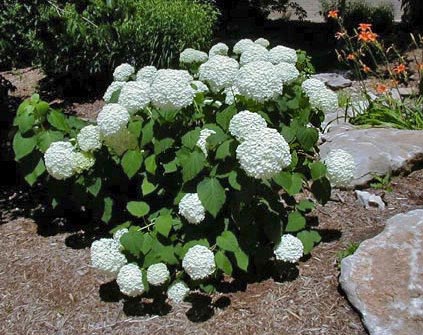 Our story begins in 1910 when Harriet Kirkpatrick was out horeseback riding along a wooded trail in the country outside Anna, Illinois. First, here’s some interesting background on the family. Kirkpatrick’s ceramics were known for utilitarian and ceremonial presentation pottery (mostly ceramic pigs) throughout the 18th and 19th centuries. Pottery manufacturing at this time was usually located where the clay and the railroads met, and geologists reported that some of the finest clay for pottery was found in and around Anna. This became a natural place for pottery. Today the Kirkpatrick’s Anna Pottery pieces have found their way to museums and collectors.

With its successful business, the family was wealthy so it could participate in leisure activities such as horseback riding. Harriet was out galloping through the woods and noticed a wild hydrangea with large, more robust snowball-like blooms than ones found on the other plants. She summoned her sister-in-law, Amy: “Have you ever seen a wild Hydrangea with large snowball blooms?” What would we do with such a find today?

As we would have done, they scarfed it up and planted it in their garden. And also as we would have done, they proudly shared it with their neighbors and friends around town. Fifty years later and growing 20 miles away in an Urbana garden, it was brought to the attention of J.C. McDaniel, famous plantsman and professor of horticulture. He loved it and set the wheels in motion for it to become a commercial success. Two years later, after some nursery propagation and further investigation, it was introduced to the world. McDaniel first wanted to register the hydrangea as “Ballerina” (are ballerinas big and rotund?) but a name was selected to honor the belles of Anna who discovered it. 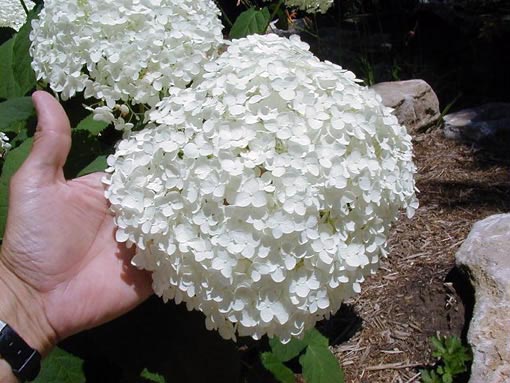 Its size and flowerheads command attention and anchor one part of my backyard. Like dogwoods, the “flowers” are actually flower bracts rather than flower petals, which is probably why they last so long. I can cut it back in the fall, and it blooms next year on new growth. I originally wrote this during the morning after an evening rain, and it reminded me of a known issue with Annabelle — the tendency of the large heads to droop over after collecting water.

Annabelle hydrangea is easy to grow, with large long-lasting blooms and few pests because it was developed in the wild by Mother Nature. She did her own plant breeding to produce this hydrangea variety. (Note that varieties are natural variations of a plant, while cultivars are variations bred and produced by man.) After growing in a clay region in Illinois, naturally Annabelle is a perfect plant for my Virginia clay backyard.