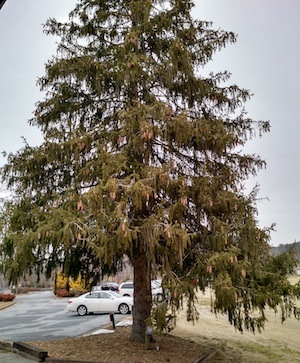 The correct answer is b. Norway spruce (Picea abies).

This is one of the most common spruce trees in America. It is found in fair abundance in our area but is even more plentiful in New England. Norway spruce does well everywhere in the continental U.S. except the Deep South and the Western deserts. It was imported from its native Europe in Colonial times and achieved high popularity thereafter. Horticulturalist Gerald Clingaman calls it “the Bradford Pear of the late 19th century” because it was so over-planted. Eventually it lost favor as a landscape specimen and became, as Clingaman observes, “associated with old cemeteries.”

This tree may grow to 80 feet in height with a spread of 20 to 30 feet. Thus, it is not unusual for a Norway spruce to become too big for its location. There are a number of dwarf cultivars such as ‘Pendula.’ This one grows to about 20 feet tall and has an even more pronounced weeping growth habit than the main species. 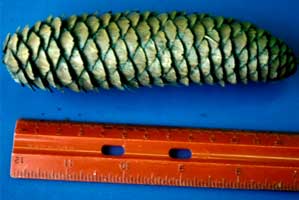 The cone of a Norway spruce can grow to five inches.

Needles are an important key to the identification of any plant in the pine family. In Norway spruce the needles are