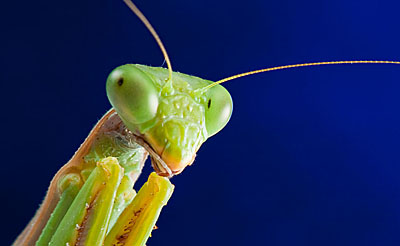 The creature looked the miniature star of a space alien horror movie. Its triangle-shaped head consisted of two large eyes and a mouth, perilously perched atop a long neck and smoothly-arched body, whose rear legs effortlessly clung to the screen of my sliding glass door. One of its front arms grasped a black ant. With its free front arm, the alien plucked a single leg from the ant and held the leg closer to one eye to examine it. It nonchalantly took a small nibble of the separated leg and turned its head 180degrees to scan the setting sun while the now five-legged ant continued to wriggle and writhe.

This 2-inch-long, brown, Carolina mantid (Stagmomantis carolina) is the native praying mantis species commonly seen in US Mid-Atlantic gardens. Two larger cousins that are common in Virginia were introduced to the United States in the early 20th century, the European mantid (Mantis religiosa) and Chinese mantid (Tenodera aridifolia sinensis). After getting their adult wings, they can reach 5 inches long and be either brown or green, their coloring variable for camouflage. We typically regret introducing non-native species into an area, particularly ones larger than our native species. They may invade an area and over-prey on the insects that we did not intend for them to “control.” Is the praying mantis in this same category? 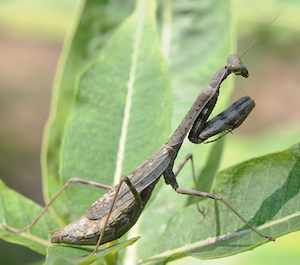 A praying mantis hatches in the spring as a nymph, emerging from a light brown egg case that is approximately 1 to 2 inches long. The nymph eats anything in close proximity, and often, one of its 300 siblings is its first meal. However, as it slowly grows and undergoes approximately 12 molts before reaching the adult stage with wings, its pest control effectiveness has been discounted by its non-discriminatory and territorial diet. The praying mantis will eat insect pests such as aphids and grasshoppers, but it also eats beneficial insects, such as bees and butterflies, and even has been observed to eat hummingbirds. Perhaps its favorite meal is that which mistakenly flies or crawls near it! Invasive destruction also is minimal due to its cannibalistic nature. It eats its own species to eliminate neighborhood competition, or just merely moves farther away, until it seeks to answer a different call of nature.

What about the reputation of the female