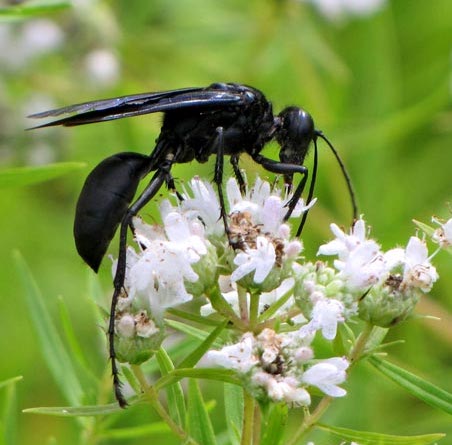 It is summer. Excitedly, visitors to my house call attention to a large paper nest hanging from a branch in our dogwood tree (Cornus kousa) about 20 feet from my front door. We see the flash of yellow on a winged, smooth, narrow-waisted, bullet-shaped flying insect with a pointed end. Do we run for a can of spray insecticide? “Be calm,” I say. “Most wasps are among the ‘good’ bugs since they prey on crop-devouring and sap-sucking insects, and many play an important role in pollination.”

Let’s take a closer look at this misunderstood group of insects by grouping wasps into two broad groups: social wasps and solitary wasps. This grouping helps describe their behavior toward humans. All social wasps form large nests with many workers and with usually one queen. Social wasps fiercely defend their nests and will sting anyone threatening it. In contrast, solitary wasps are characterized by a single female occupying a nest with her brood. Solitary wasps rarely sting. So, the shape of the nest signals presence and offers us a way to identify wasps and their anticipated behavior to us.

Most common social wasps in Virginia are beneficial, albeit somewhat frightening, insects. 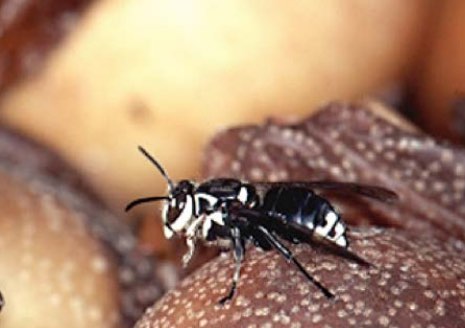 The baldfaced hornet (Dolichovespula maculata) is a large, dark, heavy-bodied, 3/4 to 1-inch long wasp with white or pale yellow marks on the head and end of abdomen. Characteristically, it builds a large oval-shaped paper nest often found hanging from a branch or twig in trees. The baldfaced hornet is a social wasp that feeds on protein such as flies, caterpillars and other garden pests including yellowjacket wasps. It is one of the good, beneficial wasps. The baldfaced hornet will ignore human activity. BUT, like all social wasps, it will fiercely defend its nest and, if the nest is threatened, it will sting. Leave the nest alone unless its location threatens humans. This nest is a one-season home. Once the cold weather comes, this wasp leaves. The nest can be removed safely in late fall and winter. In my case, a bird invaded the nest, either looking for remaining larvae or for a place to call its own, and I knew it was safe to remove it.
<img aria-describedby="caption-attachment-13433" src="https://fairfaxgardening.org/wp-content/uploads/2019/09/Paper-wasp.j