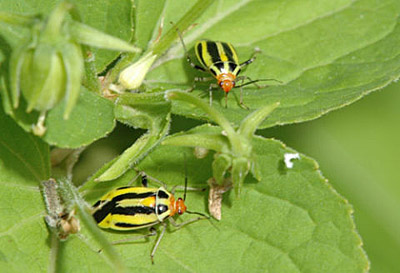 The four-lined plant bug (Poecilocapsus lineatus) causes injury to a wide variety of herbaceous perennials, shrubs, herbs and vegetables. None of the damage is life-threatening, but their piercing and sucking mouthparts can leave small holes in your new and tender plants.

Adult bugs are yellowish-green with four black stripes along their backs. They are very small, only 3/16 inch long. When they hatch, they have black wing pads and dots on the abdomen. As nymphs, they are bright red to yellow in color. The nymphs’ heads are orange-brown. As the nymphs mature, they develop black wing pads that have a yellow stripe on each. The wing covers are not fully developed until they molt into adults. 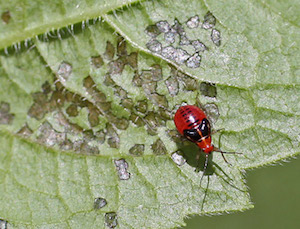 These bugs overwinter as eggs laid in the twigs of plants during the previous growing season. The females cut a slit in new growth and lay their eggs while the plants are still tender. Banana-shaped eggs are laid in groups of six or more. These eggs hatch the following spring, around the time that forsythia leaves open.

Feeding occurs for about six weeks in May and June. With their piercing mouthparts, the four-lined plant bug nymphs and adults feed on the tender growth of plants, then extract chlorophyll as they feed. While piercing the plants, they inject an enzyme, resulting in necrotic spots on the leaves. The centers of the spots eventually drop out, leaving small holes. Adults die after they mate and lay eggs for next year’s generation. There is one generation per year. 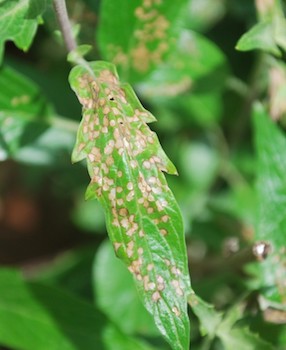 Your plants will probably survive their feeding. It is best to wait until the bugs are gone for the year. Then cut the plants back below the damage. Some wilting of your plants may occur, but they should regrow. Blooming may be delayed on perennials next year. The damage you see may look like some sort of leaf spot disease. However, the leaf spot holes are caused by a fungal infection and are reddish or purple-brown in color with a yellow or light green ring. After cutting back the damaged growth from the four-lined plant bugs, clean up the area in your garden. Dispose of the branches that were cut in the trash to prevent any eggs from hatching next year.

Inspect your plants early in the season. Nymphs are easier to control than adults, but both are very small, move quickly and will drop off of the foliage if they sense any disturbance. Try using a hard stream of water to dislodge the nymphs. Organic controls such as insecticidal soaps and horticultural oils may help to control them as well. Since they only feed for a short time, it is not cost-effective to use chemical controls. Most of the damage will be cosmetic.