By Jennifer Naughton, Fairfax Master Gardener
For a vegetable gardener, nothing is as demoralizing as putting forth a Herculean effort and losing one’s entire yield. During my first year growing tomatoes, I made a novice mistake and lost a crop of Cherokee Purple to deer. After installing an 8-foot fence, I felt safer from intruders. But last summer, I faced a more challenging opponent in the garden–the European Hornet. 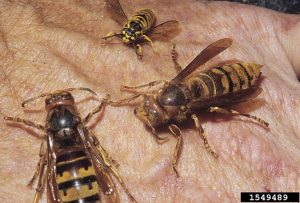 The European Hornet, otherwise known as the Giant Hornet (Vespa crabro), belongs to a family of wasps called Vespids, which include yellow jackets and the bald-faced hornet. The largest in their family, the European Hornet is brown with yellow stripes on its abdomen and a pale face. Workers are 25 mm in length, and the queen is larger at 35 mm.

Found in 31 states, from the Northeast, west to the Dakotas and south to Louisiana, the European Hornet nests in hollow trees or under loose tree bark and empty walls of barns, outbuildings, houses and attics. The nests are not usually free-hanging like the more well-known bald-faced hornet’s nest.

In spring, queens build nests, lay their eggs and feed their young. Over time, the young grow into workers who gather food, collect cellulose to build the nest and protect the nest from outside threats. Males and females mate in the fall and only queens survive the winter.

Colonies can contain 200 to 400 workers at their peak in September and October, which is when they are most likely to appear. Unlike most stinging insects, the European Hornets have a tendency toward nighttime activity. In the evening hours they forage and are attracted to light, repeatedly banging on lighted windows.

It was during these twilight hours and early fall (September) that I first noticed their activity in my garden. While I was collecting brown turkey figs after dinner, many over-ripe and falling to the ground, I was stung. Indeed, the European Hornet’s favorite food is fruit, as well as tree sap and honeydew. They also consume young crickets, grasshoppers, flies, yellow jackets and honey bees.

The sting is similar to that of a wasp, but hornets can sting repeatedly, secrete venom, an