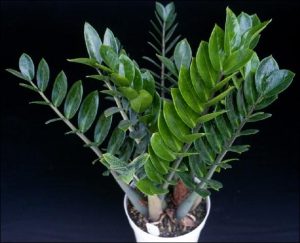 This past year, while shopping at the local garden center, I discovered the almost perfect houseplant. I had heard that it was becoming more popular, and it is no wonder. For the frequent traveler or the overwhelmed parent or the stressed remote worker who does not have time to think about houseplants, the ZZ plant needs little water and practically no care. Some say it survives on neglect.

Zamioculcas zamiifolia first grew in eastern Africa. It thrived in warm climates but quickly became a houseplant when, in the 1990’s, Dutch nurseries began to propagate it for sale. At first it was seen growing in restaurants and other industrial settings because it didn’t need much light or water. I remember seeing it in the local shopping mall interior gardens and wondering whether it was real or plastic. Recently, the ZZ plant is more easily available to enjoy in our homes.

It is a member of the Araceae or Arum family, with popular relatives including Diffenbachia, Chinese Evergreen (Aglaonema), Peace Lily (Spathiphyllum) and Philodendron. ZZ plant and the others have calcium oxalate crystals in their sap, which can cause severe irritation and burning if swallowed. Other claims about toxicity have been exaggerated and are not proven. It is best to keep them away from pets and young children.

The stems on the ZZ plant are bright green with a waxy, shiny appearance. They grow from the base of the plant from thick brown rhizomes. The stems have oval leaflets that are also waxy and glossy green and grow in six or eight pairs in a pinnately compound arrangement. (A row of leaflets forms on either side of an extension of the petiole called the rachis.) Most of the stems grow upright but some will flop over and can be removed. ZZ plants can grow to be 2 to 3 feet tall and wide. Eventually, the ZZ plant may grow and need to be transplanted into a heavier clay or ceramic pot, because it will topple over in a light plastic pot.

The ZZ plant lets us know when it has received too little or too much water. Its leaves will turn yellow and fall off if it is too wet. Allow it to dry between waterings. If you aren’t sure about watering it when you evaluate for moisture or dryness, do not water it. Its rhizomes store water, and the water is released as the plant needs it. Overwatering will kill the plant.

In the winter and in low light, water only once a month or when the entire pot is dry. It can survive one or two months without any added water. If it becomes too dry from the lack of humidity indoors, the tips of the leaves may turn brown. Fluorinated water will not affect the ZZ plant, unlike other houseplants that prefer distilled water with no chemicals. 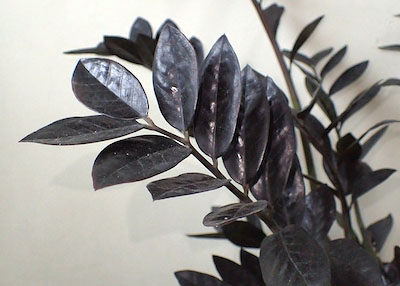 Fertilizer is not needed but can be added at half strength once or twice during the growing season. A ZZ plant will survive when it is pot bound, but it will grow more slowly. Also, do not use too large a pot when transplanting because the soil may stay too wet.

When there is too much light, the leaves of the ZZ plant will curl, and the leaves may be scalded or whitened. It prefers bright indirect light or low light. It will also grow in artificial fluorescent light with no windows and favors 60 to 80 degrees indoors. It can also be brought outdoors if the temperature is over 60 degrees night and day. Avoid temperatures under 45 degrees. Sometimes in late summer, small brownish to yellow flowers appear on more mature plants. A ZZ plant will grow more quickly in warmer temperatures.

Brown scale may affect your ZZ plant, but it can be removed with rubbing alcohol and a cotton swab. Root rot will occur if the plant is kept too moist. To care for your plant, dust the leaves with a damp cloth, and do not use other dusting or waxing sprays. 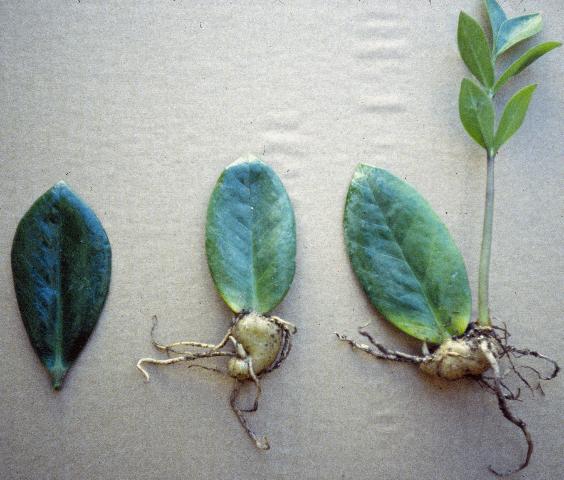 Propagation of the ZZ plant is most successful by dividing and planting roots with young, attached stems. Sometimes ZZ plants come in pots with several clusters of roots that can be carefully pulled apart and potted separately. Leaf cuttings are very slow to root, sometimes taking up to nine months.

There are two cultivars: ‘Raven,’ with dark purple foliage and ‘Variegated,’ a white and yellow variegation with maroon foliage.

Look for this easy-to-grow houseplant, even if you have difficulty with the others.