Beguiling Flowers, What Do Insects See?

By Ann M. Mason, Fairfax Master Gardener
As gardeners we spend a lot of time picking seasonal plants to attract pollinators to our yard and in the process delight our own senses of sight, smell and touch. Scientists tell us that pollinators have compound eyes, and they do not see like us.

Compound eye of the big-eyed fly

So, what do insects see?
The images that we and insects see are based on reflected light off an object. Light goes through a single lens in human eyes or multiple lenses in insects with compound eyes. The theory about what insects see was first proposed in 1826 by Johannes Müller, a German physiologist. Müller’s theory posits that each of the composite eyes sees a small portion of the total view, like a piece of a mosaic resulting in a pixilated image. These signals travel to the brain where they are ‘stitched’ together into a single image. Scientists propose insects have a somewhat blurry view of their environment. 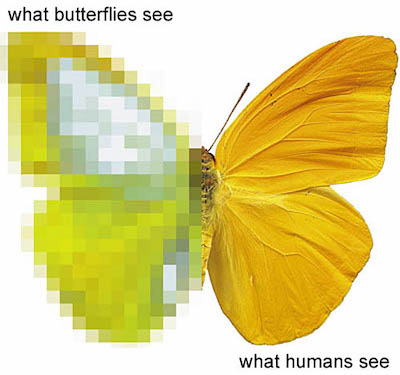 The iris and pupil in human eyes change shape and adjust for light and keep near and far items in focus. The lens focuses light rays onto the retina, which converts light into electrical impulses sent to the brain. Insect eyes cannot change shape. An international research team led by researchers at the University of Sheffield in England used a special microscope to discover that insect eyes focus by using an extremely fast twitch-like movement in the photoreceptor cells under the lens to help transform and consolidate the light signals to the brain. In addition, scientists think that insect eyes use contrasting edges of dark and light to aid their sight. Still, this is not with the same level of focus as human eyes. 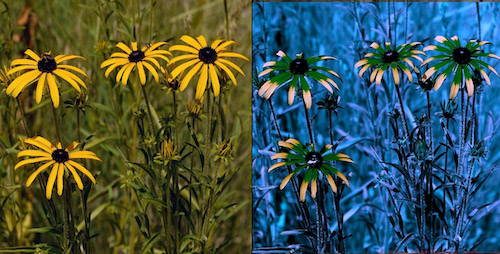 A quick look at a color spectrum allows us to conclude that the very colors that delight us — yellow, orange and red — are not seen well by insects. So how do insects, with their hazy, pixilated, vision, make their way to pollinate flowers?

Many scientists researched this question and report that flowers have a ‘bulls-eye’ marking sensitive to ultraviolet light around the reproductive part of the flower. While humans cannot see this, the insect eyes use their sensitivity to ultraviolet light to see these markings. This aids the insect as it navigates to the right part of the flower for nectar and pollen. While the ultraviolet wavelengths help guide insects to a flower, odor clues help them select the flower with the right nectar. 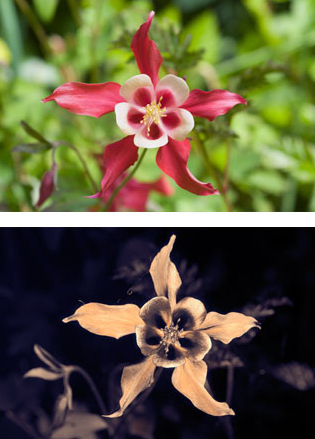 Let’s take a look at images of the star-shaped flower Crimson Star (Aquilegia caerulea). To the human eye this flower has deep red spurs, white corollas and a tuft of yellow stamens in the center. Take a look at the flower shown under ultraviolet light — the stamens appear darker and the corolla around the stamens also appears much darker. Since insects perceive edges better, especially those with high contrast, they use ultraviolet light to navigate to the nectar and pollen.

Want to know what other flowers might look like to insects? Norwegian nature photographer, Bjǿrn Rǿrslett, has a website filled with his images of flowers, their ultraviolet image and in some cases their infrared representation. This systematic catalogue can help gardeners ‘see’ or approximate what pollinators might see when they visit our gardens.