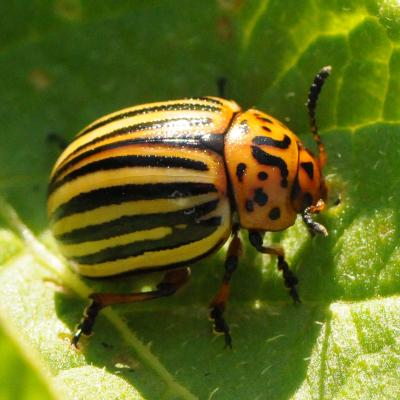 If you ever wondered if there is such a thing as a super bug — an insect pest that has multiple generations a year, causes a lot of damage to many different crop plants, and becomes resistant to pesticides, stop wondering. Let me introduce you to the Colorado Potato Beetle. This destructive little pest’s diet is not limited to potatoes. Anything in the nightshade (Solanaceae) family, including nightshade weeds, peppers, ground cherries and eggplant are on its menu.

The Colorado Potato Beetle, Leptinotarsa decemlineata, was thought to have originated in Mexico. Some older literature still states this. However, recent DNA testing and historical records show it is actually native to the western United States. It was a harmless insect that fed on buffalo bur, a nightshade weed that grows on the eastern foothills of the Rocky Mountains (think Colorado). When settlers moved West with non-native vegetables, the pest found their potatoes in the garden plots to be a tastier treat.

It was first discovered destroying potato crops in Nebraska in 1859 and followed the potato fields to eventually reach the East Coast in the late 1800s where it was not previously found. It is now common throughout North America. Europe banned importation of American potatoes in an effort to keep the pest on our shores.

If you are ever dismayed at the many European and Asian plant diseases and pests arriving here and wreaking havoc, note that the tables are turned on this pest. After success at keeping the insect out of Europe, it gained a foothold in France. Americans during World War II brought it there, and it is now found throughout Europe. Today, it continues to munch its way eastward through Asia. 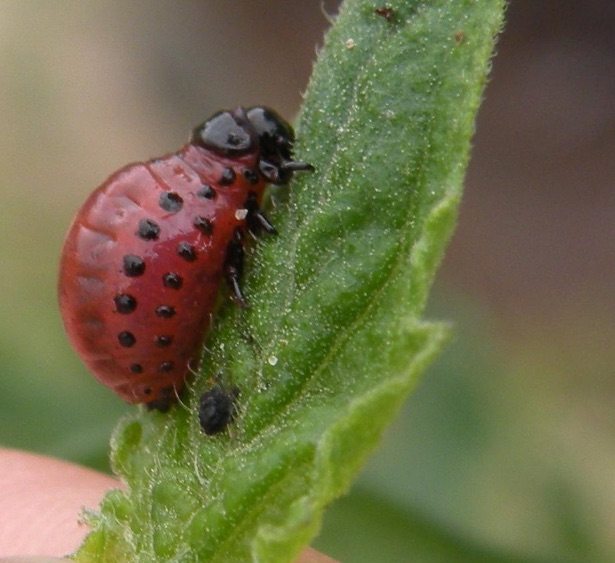 The adult beetle is plump-looking and oval-shaped with a hunchback hard shell. It is 1/3 inch and mostly light yellow or tan with 10 black stripes lengthwise on its wings. The young larvae are smooth, soft-bodied and humpbacked, with two rows of black spots along each side. When larvae first hatch, they are bright red with black heads, and as they mature, turn pink to salmon colored with black heads.

Adults spend winters 5 to 10 inches underground near their favorite plants and emerge in the spring around April and May. They eat for a short time then mate. Females lay clusters of 10 to 30 orange-colored eggs on the unders