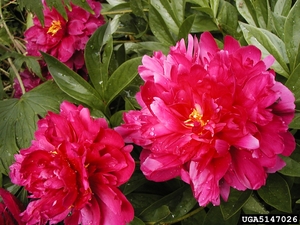 By Linda Puff, Fairfax Master Gardener
The garden peony, Paeonia lactiflora, native to Europe and Asia, is the aristocrat of the perennial garden, with large, showy, fragrant blossoms. It is the floral symbol of China, the state flower of Indiana and recognized as the 12th wedding anniversary flower. Regarded as a symbol of good fortune and a happy marriage, the peony is a very popular choice for the bridal bouquet. In ancient times, peonies were used for medicinal purposes — to cure headaches, relieve pain and treat asthma — and were believed to ward off demons. 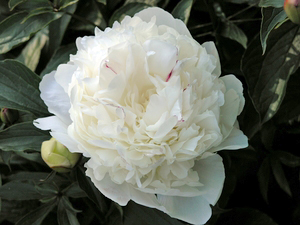 Herbaceous peonies come in many different colors, shapes, varieties and cultivars with single, semi-double and double flowers. Some bloom early and some late, over a period of four to six weeks in May and early June. Depending on the selection, blossoms can be from two inches to ten inches across. Colors range from white to cream and pink to red, lavender, multi, green, yellow, copper and so on. Many have a scent reminiscent of old-fashioned roses. Maybe that’s why the explorer Marco Polo is said to have called peonies “roses as big as cabbages.”

Today, peonies are reliable bloomers in the garden. They are long-lived and become more spectacular with age.

Proper peony care pays off
The year was 2012, and I needed to move three over-55-year-old herbaceous peonies from my mother’s home in Vienna to my home in Centreville. It was May, the wrong time of the year to transplant. The best time for transplanting peonies is in the fall, late September and October. But circumstances can force the gardener to go against conventional wisdom, so I trimmed away blooms and buds on each plant to make them easier to move.

I had prepared a planting site in bright sun and with well-drained soil. I laid out the bed so that the peonies would be planted two feet apart to allow good air circulation. I dug the holes approximately two feet deep and wide and amended the soil with compost, organic material and a high phosphate fertilizer.

After several days, the time had come to dig up the peonies in my mother’s yard and bring them to mine. This was not an easy job. The plants were happy where they were. The roots were unbelievably long and twisted. My husband and I worked and worked and finally got the plants out, placed them on large pieces of plastic, loaded them in our vehicle and drove home. Once home, we set the peonies in their holes, taking care not to place the root ball more than two inches below the soil surface. We back-filled the holes with amended soil.

It is not customary to mulch peonies, because they are prone to crown rot, but we added a very light layer of mulch for this first summer and watered the plants deeply to encourage deep root growth. The peonies lived through the hot summer. In the fall, when the foliage turned brown, I cut the plants to the ground and did a thorough cleanup job. 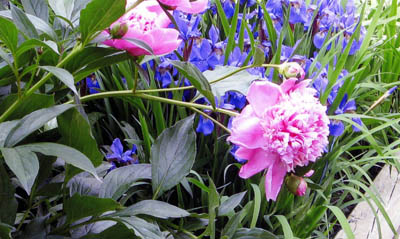 I didn’t expect the plants to bloom the following year, and they didn’t. However, they grew well, and the foliage was green and beautiful. Following American Peony Society recommendations, I fertilized them lightly in the spring and a second time in autumn using a Plant-tone product and bonemeal. This is a fertilizer combination I have used with great success in my flower garden for many years.

All of my care in transplanting and fertilizing the peonies paid off in 2014 and 2015 as my three transplants bloomed beautifully. It is now May 2016 and my plants are large and beautiful with lots of buds.

I relate this story because it illustrates the conditions that peonies require for reliable blooming: good soil for root development, full sun, regular fertilization and watering so the plant can develop and store food and plenty of air circulation and proper garden sanitation to prevent disease. 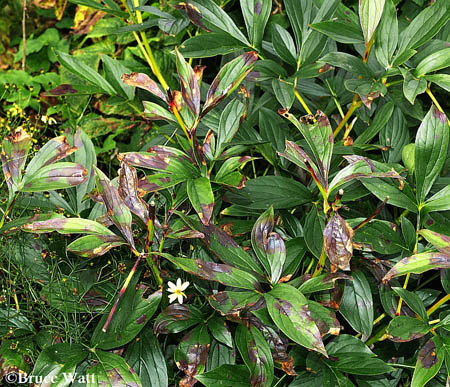 Disease
Peonies are generally trouble free, but they are susceptible to botrytis blight, sometimes known as gray mold. Botrytis blight usually shows in spring as buds turn black or brown and eventually become covered with gray fuzz. Blotches may occur on some of the leaves, and stalks may turn black and rot. Good sanitary measures are the most effective control. Keep a close watch on your plants in the spring. Remove infected plant parts immediately and dispose of them in the trash. Cut the plant to the ground in the fall. Several fungicides are available to control botrytis blight in early spring. For the proper use of a fungicide or pesticide, refer to the Virginia Pest Management Guide, Table 4.1. Follow label directions and details on application.

Peonies as cut flowers
I will cut some of the lovely flowers to bring inside my home. Yes, peony flower buds produce nectar that attracts ants. The ants climb up and help open the buds to get to the nectar contained w