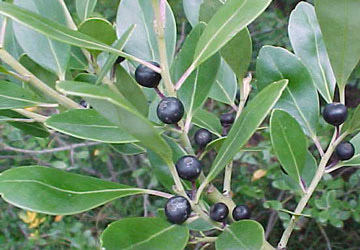 When I moved to my condominium a few years ago, I noticed a mass planting of shrubs with shiny, evergreen leaves along our busy parkway. They seemed as rugged in the summer heat as they were in the bitter cold and snow of winter. I eventually asked someone on my Environmental Committee about them, and her answer was, “Oh, those are our inkberries; aren’t they wonderful? We have never had a problem with them.”

Inkberry was a new species to me. After some research, I was surprised to learn that it is a native shrub from the eastern coastal area of the United States. It can be found from Nova Scotia to Florida and in the southern coastal states, including Texas. The species, Ilex glabra, is a member of the holly family, Aquifoliaceae. Glabra is a Latin word meaning smooth, appropriately named for this shrub’s smooth and lustrous leaves. Mature inkberries of the species can tower to 8 feet tall and wide, although most of the cultivars are half that size. Their leaves are in an alternate pattern on grayish-brown stems and are oval-shaped (obovate) with the base narrower than the top. There is some serration on the upper half of the leaves.

Inkberries have male and female plants. Both are needed for females to produce berries. The black berry-like drupes are one-fourth inch in diameter, appearing in autumn and remaining throughout the winter. These become food for birds and other wildlife. Dull, white flowers bloom in clusters on the male plants in June, whereas the females have single flowers. All the flowers become hidden in the foliage and are not showy.

These native shrubs prefer partial sun to partial shade, but adjust to any exposure. They also prefer wet, acidic soils and are adaptable to drier and more alkaline areas. If the leaves become light green, they may have an iron and nitrogen deficiency, and a fertilizer with micronutrients is recommended. Inkberries also adjust to compacted soil and some winter salt. They spread by way of underground stolons and will form colonies over time. Older plants will gradually appear more leggy at the bottom from leaf drop, and will need some pruning to maintain their compact shapes. Inkberries can also be propagated from cuttings. 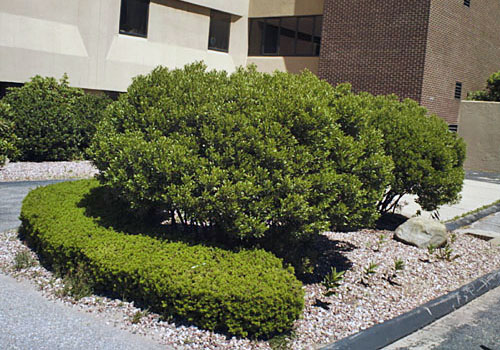 You may want to select inkberries for mass plantings, borders, hedges, foundation plantings, specimen plants, and for naturalized areas and rain gardens. They are reliable native plants that would make good replacements for Japanese hollies or boxwood hybrids. They are readily available as container or ball and burlap plants. They are also somewhat immune to deer browsing and tolerate rabbits. They have no insect problems, and air pollution from heavy traffic does not affect them. Foliage winter burn will only start at -15 degrees. Inkberry stems can become somewhat brittle and may break under heavy snow and ice. Black root rot and Phytophthora root rot are seldom a problem, and no chemical treatments are recommended.

Cultivars for the inkberry species include ‘Shamrock’, a popular dwarf variety that grows 3 to 5 feet tall. ‘Compacta,’ a female plant, has denser branching and foliage than the species, but still can grow to 6 feet tall. ‘Chamzin (Nordic)’ is a male selection and is extremely cold-hardy. It is 4 feet tall and wide. ‘Nigra’ is another short, compact variety that was cultivated to keep the lower leaves from dropping.