By Pat Dickey, Fairfax Master Gardener
One morning, as I was standing by the kitchen window, I saw the flash of a furry animal as he dashed under the neighbor’s deck and ran out again. This was the first time that I had seen any wild animals in the woods behind my townhouse, except for the usual squirrels chasing each other. He was reddish brown with pointed ears and a long, rather bushy tail. He must be the resident fox. I was concerned that he came so close to my house, especially since my little dog likes to play outside. 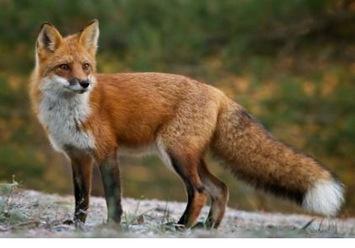 After researching further, I discovered that foxes have a natural fear of humans and will not approach them unless they are offered food or are rabid. Red foxes are the most commonly seen in Fairfax County. Vulpes vulpes are small animals weighing 7 to 17 pounds. They are good hunters and have a diet of mice, voles, squirrels, rabbits, muskrats, birds, reptiles, insects, fruit and grasses. The larger foxes may prey on small pets at night, though, so it is wise to keep them inside or securely penned. Foxes are mostly nocturnal, but we might see them during the day, especially in the early morning. They live for the most part by themselves, except during the mating season in January and February. At night, you may hear high-pitched screams, howls and yaps. The foxes are just communicating with each other during this season. They dig their own burrows or take over previously used ones to live and raise their young. They also may take up residence under decks and sheds. You may also see them during the day in March through July while they are hunting to feed their young pups.

Red foxes are important because they play a large role in controlling rats and mice. They have adapted to living in urban and suburban areas. There are precautions that we should take so that foxes are not attracted to us. Teach children not to pet or approach them. Keep pets from chasing them. Foxes are attracted to unsecured trash cans, dumpsters, pet food kept outside, fruit trees and barbecue grills with the smell of food cooking. Waste birdseed from feeders attracts rodents which will then also attract foxes. It is important to keep all of these food sources under control.

There has been concern that foxes carry rabies. In Virginia, most rabies transmitted to humans is from bats. Rarely will humans have rabies from contact with foxes. If you come in contact with a rabid fox, immediately report it to the Virginia Department of Health. 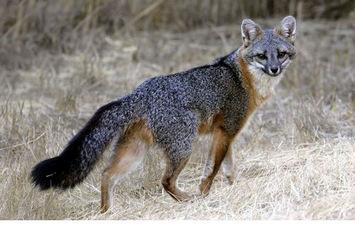 Also in Virginia lives the gray fox (Urocyon cinereoargentenus). They are not as common as red foxes in Fairfax County. The gray fox is found in the upland woods, in the riparian habitats of rivers and streams and in swamp areas. It is smaller than the red fox and is gray with white or ashy fur on its underside and lighter gray to reddish fur on its neck and sides. Its long bushy tail has a black stripe and tip. Instead of burrowing in the ground, the gray fox is an adept climber. It lives in caves and hollow logs and in trees. It will climb trees to escape its enemies. Rabbits are its favorite food as well as birds, insects, corn, apples, berries and grasses. It eats mostly grasshoppers and crickets in the summer and autumn.

You probably have also heard about fox hunting in Virginia. One of the most famous areas for fox hunting is Middleburg, VA. During the fox hunts, the fun is in chasing the fox, not killing it. The fox hunts last two or three hours and are more of a social occasion. The fox is usually smarter than all of the equestrian and foxhound pursuers and is rarely caught.

For the most part, foxes are our friends because they help to control undesirable animals around our homes and gardens. We just need to keep our distance and admire them.