Not Your Grandma’s Daylily 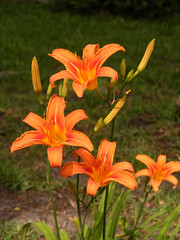 Everyone has seen the common orange daylilies growing and blooming as a weed along roadsides, in edges of meadow or farmlands, or in someone’s garden. Officially known as the Tawny Daylily (Hemerocallis fulva), we have heard them referred to as ditch lilies, wild lilies, orange lilies, common lily or what my mother called them — tiger lilies. They are popular because of their showy, colorful flowers and their ease of growing without a green thumb.

Those orange daylilies are native to China and Korea. Legend states they were brought to America from the Orient by sea captains during the early Colonial period for their wives. They were widely cultivated and traded by gardeners in America and spread across the continent in the following century. After escaping gardens to the wild or thrown away, they are now found growing as a weed. Some even thought of them as native plants, because they are found everywhere in North America.

Refined gardeners eventually turned their backs on the common, boring orange daylily. But over the last few decades, plant breeders have begun tinkering with genetics and producing some new stunning cultivars. Manipulation of chromosomes began in 1937 when an alkaloid drug extracted from the fall blooming crocus caused chromosome doubling in a number of plants, among them daylilies.

They are relatively maintenance free and are not picky about growing conditions. They are drought tolerant but do best in moist soils — like those found along roadside drainage ditches. Full mid-day sun can cause colors in the blooms to fade; partial shade helps prevent it.

Daylilies make a great plant for beginner gardeners because they are undemanding and can grow and bloom in different soil conditions. With their various colors and bloom time now available, almost all gardeners can find a place in their gardens for this dependable perennial.