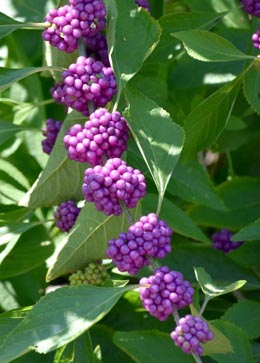 By Gretchen Spencer, Fairfax Master Gardener
Several years ago, my neighbor and I decided to plant shrubs between the top of our parallel driveways. After researching shrubs that would thrive in that part-sun area of the yard, we decided on Beautyberry (Callicarpa). I knew little about the shrub except that it had stunning clusters of small purple berries that grew atop and around the branches in the late summer and fall. Now, six years later, I can attest to the beauty and grace that this stand of five shrubs, now fully mature, brings to our shared landscape. As I write this in early September, the berries are beginning to turn from pale green to bright shiny purple. And even after the leaves fall off, the berries will continue to adorn the branches into the winter. Wanting to know more about this genus of shrubs, I turned to the experts. In so doing, I tried to determine exactly which species of Callicarpa we had planted, as neither my neighbor nor I had kept a record!

Callicarpa comes from two Greek words (callos meaning beauty and carpos, fruit), referring to the most distinguishing feature of these shrubs. The rounded drupes, composed of approximately 25 to 30 small purple berries that develop from each leaf axil, have been described as iridescent, metallic, a