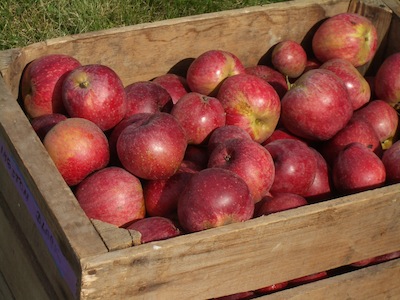 Our saying “An apple a day keeps the doctor away” is supposed to have been based on an old English saying, “To eat an apple before going to bed, will make the doctor beg his bread.” Bananas have recently replaced apples as the most popular fruit in America based on sales. We cannot grow bananas in our backyards, but with little being done to control climate change, who knows about the future? You can grow apples in your yard, but know that you would need to purchase the plants from a nursery in order to have the types of apples you find in the stores.

Background
The history of the apple is long. Apples (Malus) originated in Asia, in the forests of the region around Kazakhstan. The native trees (Malus sieversii) were large, growing up to 50 feet in height, and probably produced fruit the size of cherries. It is believed that they were the first trees cultivated by humans.

To understand the rest of the history, you need to know the biology of apples. Apple trees are cross-pollinated by bees. The fruit produced is the result of pollination with another variety, or with crabapples, which are of the same Malus species. The plants generally need pollen from a different tree, and will not produce much fruit unless pollinated with other trees. As a result, seeds that do develop in the fruit will not produce plants true to the parents, but will be quite different from the parent. Therefore, planting apple seeds will give you a completely different type of apple tree.

Apple trees eventually spread along the Silk Road through Asia. Travelers probably picked the best fruit and discarded the seeds that then sprouted and hybridized with other trees and crabapples, producing millions of apple varieties over the years. The apple genome contains over 57,000 genes, about twice as many as human genes and the highest number of any plant found to date. There are more than 7,500 known apple cultivars today.

Apples have been enjoyed for thousands of years throughout Asia and Europe and in the temperate regions throughout the Northern Hemisphere. They were brought to America by European settlers. We know the legend of Johnny Appleseed planting apple trees throughout the country. Settlers enjoyed fermented apple cider that can be made from any type of apple. Due to the apple’s reproductive traits and the resulting fruit being inedible or small, his seed-planting legend more likely resulted in keeping settlers stocked with ingredients for booze. In reality, he actually helped plant orchards with grafted apple trees, but the legend is a more romantic idealization.

Selection
To assure a consistent type of apples and to reproduce the types of apples humans want, plants must be grafted onto root stock. Every cultivar we know and grow today started as a single plant that someone selected as having desirable traits in fruit, size and taste. The root stock can determine the size of the tree, whether full size, dwarf or semi-dwarf. So, if you want to grow good apples, or almost any other type of fruit in your backyard, you cannot plant seeds. You must purchase plants that have been grafted onto root stock. 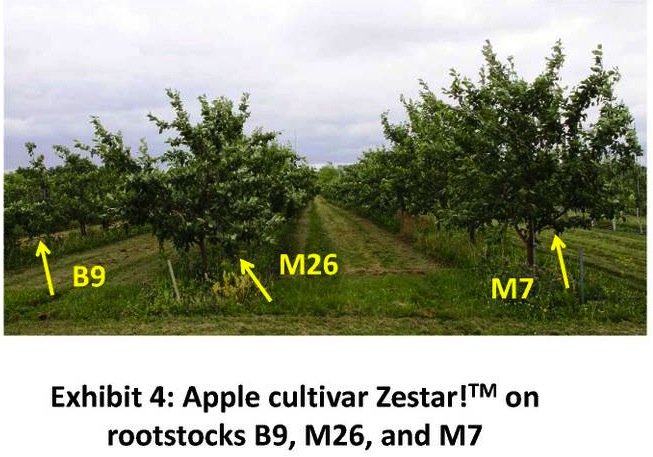 Cultivar selection should be based on what type of apple you want, and what types might offer some resistance to diseases and pests. After all, you want to use as few pesticides as you can. Some cultivars are available in several strains. Strains are mutations that have developed on certain cultivars that may have different characteristics in growth or fruit.

Care
Fertilize the trees to help with establishing the transplants and with fruit production in subsequent years. If trees become stressed and produce poor fruit quality, they can become more susceptible to pests and diseases. Overfertilization can produce excessive, weak growth, attractive to attack by sap-sucking insects.

Follow recommendations from the publication Growing Apples in Virginia and fertilize each spring if necessary. A soil test will let you know if fertilizers need to be applied. Be careful if trees are near turfgrass, which should be fertilized in the fall. Late fertilization can lead to growth as the plant is hardening off to prepare for winter. Very late fertilization as the trees are going into winter dormancy can lead to the fertilizer being leached through the soil before it can be used.

Watering is important for establishing the trees during the first few years of growth. Be sure to water deeply and not let the roots dry out.

Thinning and pruning the trees is important. Thinning out will remove some of the fruit so that remaining fruit will develop adequate size. Thinning will also increase flower buds for next year. Without thinning, biennial bearing problems can crop up such as overproduction one year followed by low yields the next. Thinning fruit reduces weight on branches, reducing breakage and the need for supports. Thin out fruits that are less than 1 inch in diameter.

Pruning will reduce the number of branches and will open up the tree to allow spray application to reach the interior, and will also allow in sunlight. Prune dead and dying branches that can harbor insects and diseases.

Common Diseases
Like a lot of the fruit trees, apples require a bit of attention to grow the crop you expect. There are over 20 insects and diseases that you must be on guard against. It is virtually impossible to grow apples without some pesticides. Timing the pesticide applications is important to coincide with the appearance of the pests.

Apple scab is a fungus that causes as much damage as all other diseases combined, attacking leaves, fruit and stems. It overwinters in the dead apple leaves under the trees. It releases spores that are carried by air currents to the new green leaves and opening fruit buds in the spring.

Powdery mildew, a fungal disease, attacks the leaves, blossoms and fruit, and resembles a powdery coating. Terminal buds in the spring can become stunted or killed, and blossoms can be infected and fail to fully develop, thus preventing fruit from forming.

Apple rusts such as the cedar apple rust and quince rust are both caused by a fungus. Both can attack leaves and cause extensive defoliation and reduce the plant’s health during dry periods. They are most prevalent in warm, wet conditions and controlled by fungicides. 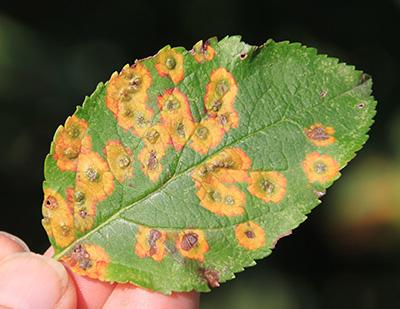 Black rot, another fungus disease, attacks the fruit, leaves and branches. On the fruit, it develops slowly and appears on leaves as small purple spots.

Common Insect Pests
Many of the insect pesticides must be applied at just the right time the insects are out or are susceptible in order to be effective. Note that weather may delay or promote the scheduled arrival or development of a certain pest, so application times for pesticides are given related to the phase of annual plant growth. 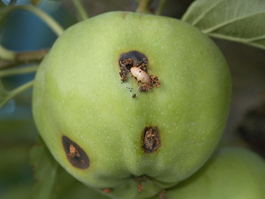 The codling moth is usually recognized by a small hole bored into the side or bottom of the apple. The damage caused by the larvae can completely destroy the fruit. The larva exits the apple, falls to the ground and climbs to the tree to mature into a moth under or within the bark after it overwinters. There can be two or three generations in Virginia.

Apple maggots are small flies whose larvae damage the apples and then overwinter and pupate in the ground after the fruit has fallen. Adults will then emerge next year to start the cycle again. Apple maggot traps can control infestation. 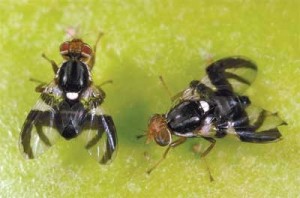 Growing apples at home requires a lot of vigilance and patience. With the help of information from Virginia Cooperative Extension and Virginia Tech, you can keep the diseases and insect pests under control.