The Family Polygonum: Smartweeds and Knotweeds 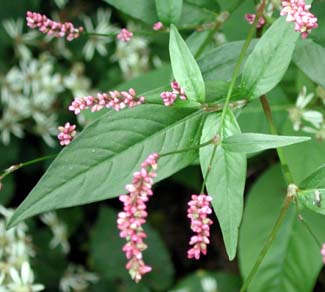 By Ann M Mason, Fairfax Master Gardener Intern
Have you ever seen pink, green or white flowers on a broadleaf grass-like plant and wonder if it is a weed or a plant to keep? I have. In fact, I so admired one that I planted it in my ornamental bed before I knew what it was. It settled in nicely, found its niche and emerged every year. Visitors to my yard stopped in their tracks and always asked what it was. With its beautiful oval medium green leaves with a red thumb mark, it grew and thrived in my sunny to partly shady yard. Then it took over. My love affair with this perennial hit the reality that my beautiful plant needed annual maintenance to keep its rambunctious joyfulness in bounds.

So, what is this subtly beguiling chameleon that entices the gardener but is a widely spreading native? And what are its garden cousins? 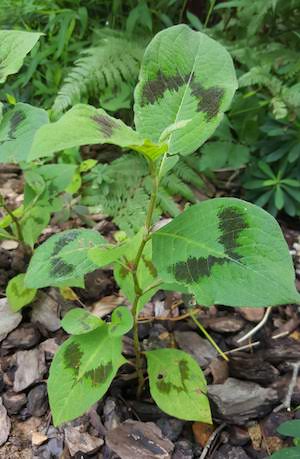 My plant, Virginia Knotweed, Persicaria virginiana ‘Painters Pallett,’ is a native perennial that also is called Jump Seed because of the way the bright red fruit containing its seeds leap off the slender stalk when disturbed in autumn — one reason it multiplies. Its colorful ovoid medium green leaves have the characteristic red V-shaped marking, which attracts admiring comments from other gardeners. In autumn, a slender wand-like flower stalk appears with inconspicuous white flowers clustered in the leaf axil. The flowers turn into noticeable bright red fruit. P. virginiana grows from a crown-like knot with rhizomes that also contribute to its spread. Growing happily in both sun and part shade, Virginia Knotweed is reported to grow between 1 to 5 feet. I always break its stem to keep its size smaller and to thwart the flower stalk. I have learned three “tricks” to keep this rambunctious native in bounds: Cut off the stalk before it can disperse its red fruit containing seeds; remove the entire crown-shaped knot from below the ground in places where you do not want it to grow; and pull new seedlings when they first emerge in the spring.

Other members of this family look similar and might confuse the gardener. Two common annuals have leaves with red thumbprint markings. One, the invasive, non-native Spotted Lady’s Thumb (Persicaria maculosa, aka Polygonum Persicaria), is a weed that can naturalize. Its long slender sword-shaped leaves appear pointed at both the base and tip. The second, the annual, Pennsylvania Smartweed (Polygonum pensylvanicum), has pink flowers appearing in tight terminal clusters. Its alternative leaves are lanceolate (sword-like) or oblong with a rounded base and pointed tips, and the leaves appear on short stalks. The gardener can distinguish between these two by looking at the ocrea, the lower part of the leaf which encircles the node (the place where the stem and the leaf join). The ocrea of the Lady’s Thumb has a hairy top while the Pennsylvania Smartweed has a smooth top. While their pink flowers are pretty, it is best to remove these weeds quickly, so they do not settle into the garden or turf.

Comparison of the Ocrea of Ladysthumb Smartweed and Pennsylvania Smartweed

Other annual members of the family Polygonum that Virginia gardeners may see include: Oriental Lady’s Thumb (Polygonum cespitosum); Asiatic Tearthumb (Polygonum perfoliatum), also known a mile-a-minute weed, with a triangular leaf on a round or oval stem and grows as a rampant vine covering its neighboring plants; Prostrate Knotweed (Polygonum aviculare) with its slender stems and tiny oblong leaves in early spring sprawling low to the ground and popping up in compacted soils, such as in driveway and sidewalk cracks; its cousin Erect Knotweed (Polygonum erectum) is similar in appearance but with an upright growing stems; and the Curly-top Smartweed (Persicaria lapathifolia, aka Polygonum lapathifolium). 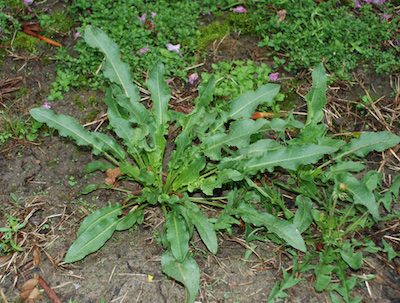 Perennial members of the buckwheat family include Japanese Knotweed (Polygonum cuspidatum); Curly Dock (Rumex crispus); Bitter Dock (Rumex obtusifolius); Scarlet or Marsh Smartweed (Polygonum coccineum) and Red Sorrel (Rumex acetosella). Japanese Knotweed, sometimes called Japanese Bamboo, is a difficult to remove, aggressive plant with hollow stems and thick rhizomes. At maturity it can look like a woody shrub. Scarlet Smartweed resembles its annual cousins Pennsylvania Smartweed and Lady’s Thumb Smartweed and has an extensive root system making it difficult to remove once established. Curly Dock has a long taproot and a rosette of wavy-margined leaves. Red Sorrel’s arrowhead shaped leaf makes it easier to identify than other members of this family.

Many other Smartweeds grow in or near ponds, lakes and other wet places including Waterpepper or Swamp Smartweed (Persicaria hydropiperoides, aka Polygonum hydropiperoides); Longroot Smartweed (Persicaria amphibia, aka Polygonum amphibium); Pink Smartweed (Persicaria bicornis); and the non-native Marshpepper Smartweed (Persicaria hydropiper, aka Polygonum hydropiper).
Virginia Tech reports that pre-emergent herbicides are effective if applied in the late fall, winter or early spring before the weed seeds germinate. There are a few post-emergent herbicides containing dicamba that can control these plants. Before using any herbicide, please do your research, read and follow herbicide labels. Some annual Smartweeds are easily controlled by pulling the weeds out after misting the soil lightly. For the perennial Knotweeds, persistence is needed to mechanically remove the crown and roots in established plants — it is best to pull them when they emerge.
This article might give the impression that most members of the Polygonum family have little value. So, I will mention that one of my favorite summer foods is rhubarb (Rheum sp), a perennial member of the Buckwheat family. The gardener can harvest and eat (raw or cooked) the reddish green leaf stalk (petiole) but avoid ingesting the large leaves and roots which contain the toxicant oxalic acid.
Resources
• 2020 Pest Management Guide: Home Gardens and Animals, Chapter 4, Home Ornamentals: Weed
Management in Ornamental Beds, Tables 4-11 and 4-16, Virginia Cooperative Extension,
Publication 456-018
• Weed Identification, College of Agricultural and Life Sciences, Virginia Tech
• Smartweed, Polygonum spp., Texas A&M AgriLife Extension
• Persicaria virginiana, Missouri Botanical Garden
• <a href="https://msu.edu/course/plb/423/Species_Accounts