Problems we usually see this month

Normally, July is a big month for samples with spider mites, leaf scorch, and plants stressed from under- watering. In some years we have had multiple wet spells when our area received a lot of rain over several days. In these years there is less drought stress than usual, but perhaps more root rot. Of the other problems we have discussed in previous months, we will still see samples of anthracnose on trees, early and late blight on tomatoes, lacebugs, various fungal leaf spots, and scale insects. Many of these problems began in spring but are only now being noticed by homeowners.

There are too many new problems arriving this month to cover them all here. For the problems we have seen less often, we are only providing a few notes and references at the end of this document.

These reports are prepared for use at plant clinics by Master Gardeners. They are republished here to assist experienced gardeners in identifying and treating plant problems. Please remember to refer only to the Virginia Cooperative Extension Pest Management Guide for pesticide recommendations.

There are several hundred different species that cause downy mildew diseases on plants. They are fungus-like organisms called oomycetes (water molds), in the family Peronosporaceae. Most downy mildew species are specific to a single plant species, genus, or family. In recent years, we have seen downy mildews on cucumbers, basil, grape, impatiens, and rudbeckia.

The disease has a different appearance on different hosts. It can cause blighted or distorted leaves, but it often appears initially as discolored spots on upper leaf surfaces, usually off-color green, yellow, tan, brown or black. Spots are usually angular, bounded by leaf veins, but expand and coalesce as the disease progresses. The key to diagnosing this disease is on the undersides of the leaves. Beneath the discolored spots, there will be fuzzy (“downy”) growth of spore-producing structures that can be white, gray or nearly black.

Control Recommendations
The available chemical controls only protect treated plants against infection, do not eradicate the disease, and must be frequently re-applied. The general recommendation for annual plants is to dig out any infected plants, seal them in plastic bags, and dispose with household waste. (Do not compost and do not recycle with yard waste.)

There are many different species of mites in the family Eriophydae that cause deformities in leaf, bud and twig growth. Some cause blisters, some rust spots, and others witches broom, but the damage we have been seeing most are the leaf and bud galls. Our recent samples have included black gum, caryopteris (or bluebeard), and maple. 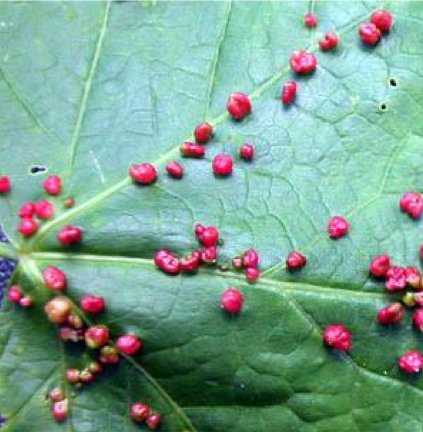 These microscopic mites infect leaves and buds of plants in early spring. They continue to feed during the growing season, injecting a chemical that causes the abnormal growth. Galls will have a tiny exit hole on the underside. They can be cushion shaped (like the Maple Bladder Gall in the photo) or elongated (sometimes referred to as finger or spindle shaped). Galls often turn from green to yellow or red as summer progresses.

On caryopteris, the mite attacks leaf and flower buds, forming warty-looking galls around the stems where the flowers should have been. Galls start out green and turn brown by mid-summer. If not removed, galls can persist for several years.

Leaf and stem galls can also be caused in different plants by small insects, including tiny wasps, midges, adelgids, aphids and psyllids. Correctly identifying the cause usually begins by identifying the plant host and researching its known pests.

Control Recommendations
While galls may be cosmetically undesirable, rarely is enough foliage affected to cause trees serious harm.

For bud galls on caryopteris, prune out infected stems once plants are dormant to reduce overwintering populations. As this plant blooms on new wood, stems can be cut to the ground in winter without affecting next year’s blooms. Apply controls in spring as buds swell.

The Pest Management Guide control recommendations for eriophyid mites are found in Table 4.5 under Mites. Treatment needs to be applied in early spring before new growth develops. By the time galls are noticed, it is usually too late to apply controls that year. 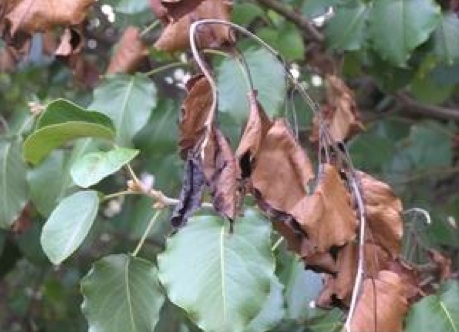 Fire Blight is caused by the bacterium Erwinia amylovora. It attacks only plants in the Rose family, including apple, pear, quince, pyracantha, cotoneaster, mountain ash, hawthorn, and raspberry. All our recent samples with this disease have been pears.

The disease usually begins in the spring with infection of blossoms and new shoot growth. Leaves initially turn a dark green or gray green, then rapidly change to brown then black. Blackened twigs look as though burnt in a fire. The infection moves down the twigs and into branches. If the infected branches are not removed, the plant will eventually die.
Some keys to diagnosing this disease are:

Some fungal diseases (such as brown rot on cherries) can cause similar looking damage. If fungal fruiting bodies are present on diseased (but still living) tissue, the stem dieback likely had a fungal cause.

Control Recommendations
Avoid heavy nitrogen fertilization, especially in summer when succulent growth is most susceptible to fire blight infection. Prune out cankered limbs and branches 8 inches below the damage. Avoid pruning when the plants are wet. Dip pruning tools in a sterilizing solution of 70 percent isopropyl alcohol or 10 percent chlorine bleach between each cut. Prune out water sprouts and suckers, which are highly susceptible to infection. Fire blight control is difficult and expensive. Chemical control is not always effective and needs to be applied preventatively. There are apple and pear varieties with some resistance to this disease.

The Pest Management Guide general chemical recommendations for control of fire blight on ornamentals are found in Table 4.1 under Bacterial, Fire blight (page 4-10) and more specifically in Table 4.2 for Crabapple and Ornamental Pear.

Fire blight on apples is discussed on page 3-9. Control recommendations are also found in the Spray Schedules for apples (Table 3.5) and pears (Table 3.6).

Japanese beetles begin hatching in late June and will feed and lay eggs until early August. They are easily recognized by their bottle green color and coppery wings. Beetles feed on a wide range of woody and herbaceous plants, including leaves, flowers, and over ripe fruit. 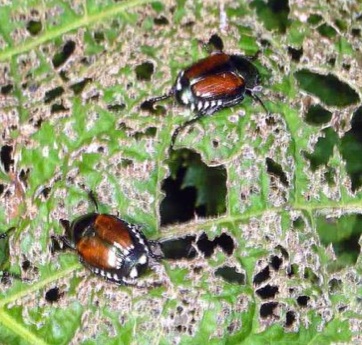 Beetles will sometimes feed on leaf margins, but their damage is more commonly many small holes between the veins, sometimes completely skeletonizing the leaves. In heavy infestations, leaves may be eaten all the way to the midrib. If you see only scattered, tiny holes, the culprit is more likely a flea beetle.

Control Recommendations
Although the damage is not attractive, plants will not generally die from beetle leaf damage. As flying insects, they are difficult to control with sprays, and tend to be present in similar numbers whether or not controls are attempted.

Hand removal can be effective when beetle numbers are low. Early in the morning, when insects are sluggish, shake beetles off branches into a container of soapy water.

The Pest Management Guide recommendations for control of this insect are found in several places. 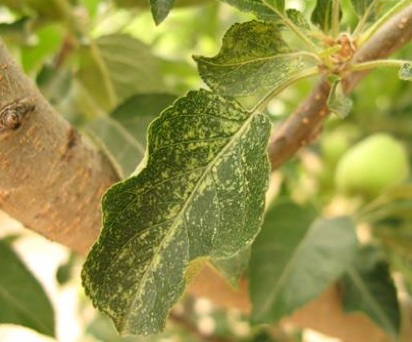 Leafhopper is a common name applied to any species from the family Cicadellidae. They are tiny (about 1/8″ long) and slender. You are unlikely to see the insect itself on samples brought to clinics, as adults are winged and hop off the plant when disturbed. Nymphs cannot fly, but move quickly.

Leafhoppers feed on a wide range of plants by piercing leaf cells and sucking out the contents, causing the leaf tissue to turn white. This stippling can look similar to lacebug or spider mite damage. Examine the undersides of leaves to eliminate those possibilities.

On most plants, damage is limited to stippling on leaves and sometimes leaf curling. On potatoes, leafhoppers cause “hopper burn” – yellowing and downward curling of leaves and brown leaf tips and margins. Leafhoppers are also known vectors of plant virus and bacterial diseases.

Several members of the fungal group Phyllosticta sp. cause leaf spots on a variety of woody and herbaceous plants. Locally, Phyllosticta minima infect many maple tree species. Lesions begin as brown spots on leaves that enlarge with centers becoming tan in color. Edges of the lesions have purple or red rims, hence the other common name, purple-eye leaf spot. Lesions can merge and centers fall out creating ragged holes in the leaf. Some leaf drop may take place when there is extensive infection. However, new leaves grow in summer to replace those lost in spring.

Control Recommendations
These infections are usually more cosmetic than threatening to healthy hosts and fungicides are not generally recommended. Instead, clients should be advised to

There are 5000 or more species of fungi that cause diseases we refer to collectively as rust. They infect crops, ornamentals, turfgrass and other plants. Most rusts are host specific. 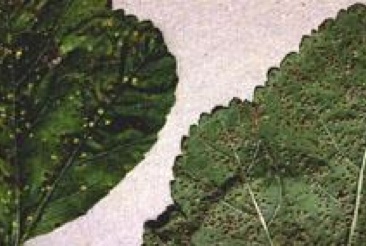 Rust typically appears as small, bright orange, yellow, or brown pustules on the underside of leaves. If touched, they leave a colored spot of spores on the finger. There is typically a corresponding off-color spot (often yellow) on the upper leaf surface. Like many fungal diseases, rust is worse when weather is moist.

In recent years, we have seen rust on hollyhock, beans, azalea, daylily, and hydrangea. It is also sometimes seen in our area on iris and bluegrass.

Control Recommendations
The Pest Management Guide recommendations for control of rust are found in several places. 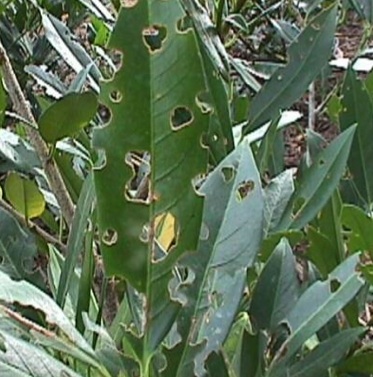 Shot hole disease causes holes in leaves of various sizes and sometimes leaf margins that appear ‘scooped out’. This disease is caused by a combination of the bacteria Xanthomonas arboricol pv. pruni and/or Pseudomonas syringae and several fungal pathogens, including Cercospora species. Both fungal and bacterial pathogens can be present on the plant at the same time. These pathogens can infect plants in the genus Prunus, but all our samples have been Cherry laurels (Prunus lauroserasus). The disease begins as circular leaf spots, usually red, brown or wet looking. Centers turn tan before dropping out. These holes and notched edges can easily be mistaken for chewing insect damage. When spots have a reddish edge and a yellow halo, the bacterium is present. You may also see stem cankers. Symptoms will look somewhat different on deciduous Prunus species.

Prolonged wet, warm conditions from May to September contribute to the development and growth of these infections. Most of these pathogens can overwinter on the plant and in leaf litter around the plant.

Control Recommendations
Ordinarily, shot hole disease does not threaten the life of cherry laurels and is usually considered a cosmetic disease that does not need chemical treatment. Infection can be limited by following the same basic cultural advice given for many fungal diseases.

The Pest Management Guide does not provide any chemical control recommendations for bacterial leaf spot or shothole disease in ornamentals. When a fungal organism is also present, some control may be obtained by use of a commercial fungicide labeled for the plant.

Other Problems Worthy of Mention