By Helen Hollingsworth, Fairfax Master Gardener
The common sow bug has many regional names in the United States, including armadillo bug, hog-louse, pill bug, potato bug, roll-up bug and the all-time favorite, roly-poly. They are crustaceans in the Isopod order, not insects. They are light to dark gray and are one-fourth to three-fourths of an inch long and are segmented with seven pairs of legs. Sow bugs (Porcellio laevis) have a pair of tail-like parts. Pill bugs (Armadillidium vulgare) do not have them and, unlike sow bugs, are able to curl up into a ball. 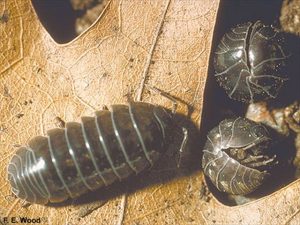 These creatures must live in a moist environment and are seen under objects such as boards, stones and plant containers, and in plant debris and mulch. Because their shells are thin, they cannot survive in dry locations. They are considered beneficial decomposers and are usually benign in the garden, feeding primarily on decaying organic matter.

Sow bugs and pill bugs are not considered pests; however, occasionally they will feed on young seedlings, tender, lower, young leaves, and fruits and vegetables that are lying on the soil. This can be minimized by keeping mulch away from the base of young plants and removing decaying plant material. Early morning watering is helpful. No chemical controls for outdoor use are recommended in the Virginia Pest Management Guide.

Interestingly, pill bugs are able to process heavy metals, such as cadmium, removing them from tainted soil. They are very important decomposers in contaminated soil since many other species cannot tolerate this environment. They are also important in the regeneration of healthy soils.

Clients may come to our plant clinics asking for advice about these bugs entering their homes, particularly in damp basements. This is more common in late summer and fall as they seek places to overwinter and sometimes to escape excessive moisture due to heavy rains. They can be seen again in spring as they seek their natural habitat outside. Although they pose no danger to household items, they are sometimes considered a nuisance. 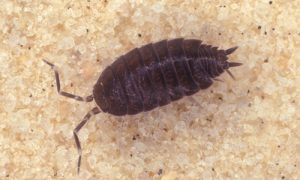 Sow bugs are unable to survive in a dry environment. The first recommendation then is to make the environment drier. Stones, pots, mulch or any other moist hiding spots immediately adjacent to the foundation can be relocated. Sealing cracks and gaps is also important, as is good ventilation. Dehumidifiers and optimizing outdoor drainage should also be considered These measures can be enough and, if done properly, are all that is needed to eliminate the problem without pesticides. If these methods do not work, desiccant dusts may be applied along the inside of exterior doorways and basement windows.

In conclusion, these little creatures are both friend and foe, depending on where you find them. Outdoors, they are beneficial friends helping to break down dead plant debris. In the house, they are foes worth removing.