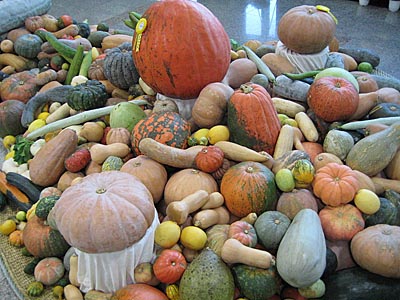 I left for a weekend vacation one summer and came back to find zucchini squash the size of baseball bats in my garden. Yes, zucchini, Cucurbita pepo var. ‘cylindrica’) is a fast growing member of the cucurbit family of vegetables that grow on vining plants with edible yellow flowers. Cucurbits include melons, cucumbers, and pumpkins. Zucchini, along with yellow squash, is classified as a summer squash. It is harvested in summer and is eaten before the seeds are fully developed and hardened. Winter squash consists of butternut, acorn squash, and pumpkins that are harvested in fall or winter and have thicker skins or rinds to permit winter storage.

Squash originated in North and South American and was cultivated for food throughout both continents by Native Americans. Our current zucchini and summer squash are relatively new introductions. Zucchini was developed in Italy from seeds brought back from early European explorers like Christopher Columbus. The term zucchini comes from the Italian word zucca — pumpkin or squash — and zucchino — a small squash. 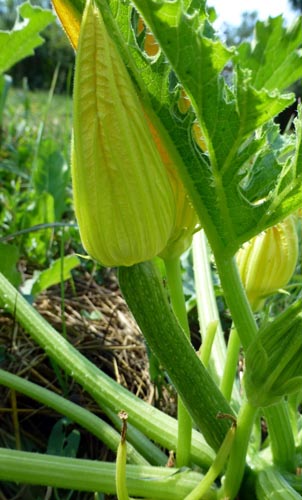 Female flower at end of zucchini

Zucchini loves warm temperatures and fertile soil so fertilizing on a regular basis is recommended. It does not like cold, so planting early in the season before the soil warms up is detrimental. Like all melons and squash, it needs water on a regular basis. Virginia Cooperative Extension recommends ‘Goldrus’, a yellow zucchini, and ‘Puma’, a F1 hybrid green zucchini for Virginia gardeners. This gardener has had great success with ‘Black Beauty’ over the years.

Virginia sees several problems that plague our zucchini crops — powdery mildew and insects including a beetle, the squash vine borer, and the pickleworm. Powdery mildew is a fungal disease that attacks almost any plant, but seems to like squash. It looks like a white or gray powder on the leaves, and usually attacks in the latter part of the growing season when temperatures begin to drop. You can easily spot it growing on the top of squash leaves. 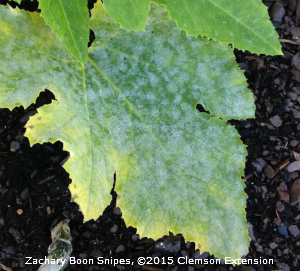 Powdery mildew affects the leaves and buds but will kill the plant only in severe outbreaks. Prevent it by providing adequate ventilation around the squash plant, making sure there is plenty of sunlight throughout the day, and watering early in the day to keep the plants dry. Treatment often includes using a potassium bicarbonate spray or neem oil.

The squash vine borers are probably the biggest threat to zucchini grown in Northern Virginia. These pests are moths, with about 1 inch long wingspans resembling paper wasps with a red orange body. They are members of the clearwing moth family, but are active during daylight. The moths lay their eggs on the leaves of squash plants. Caterpillars emerge and bore into the main stems, eating their way through the stems for several weeks. Visible damage is described as sawdust from the frass (or fecal matter) at the entry point to the stem. Soon the stem wilts and dies. 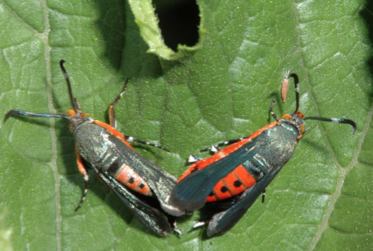 Control of squash vine borers is difficult once the borer is inside the stem where they are protected from pesticides, so prevention is best. Floating row covers prevent eggs from being laid, but must be removed periodically to allow pollination. Wrapping vines in aluminum foil or netting can help prevent the larva from boring into the vines. These pests can overwinter in the ground, so cleanup of old plant material in the fall and soil tilling will disrupt them.

Insecticides can be used at the base of the plants to kill the borers before they enter the vines. An organic pesticide such as Kaolin clay is recommended as well as permethrin. Both can be applied up to the day of harvest. Note that insecticides can harm pollinators, so they should be applied to the base of the vines and at night when pollinators are not active. Once infected with the borers, a plant can sometimes be salvaged by cutting out the infected area and burying the remaining stem in moist soil to encourage new root development. 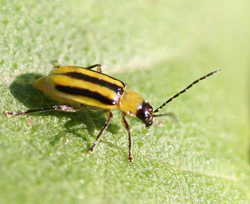 The cucumber beetle is another common pest that damages Virginia zucchini. The beetle feeds on the plants throughout the growing season, but the main problem is that they transmit bacterial wilt to the plants which are then killed or severely affected. Cucumber beetles can attack cucumbers and melons as well. Damage can be prevented with floating row covers and controlled with the use of neem oil, and pyrethrins, and stronger synthetic chemicals such as permethrin.

Pickleworms are a threat late in the growing season but not every year. They overwinter far from Virginia in the Gulf States, and the adult moths gradually migrate northward each year. The migration is accomplished through several generations. The larval stage does the damage by burrowing into the zucchini squash itself. You will see round holes in the squash with frass nearby. Control can be achieved by applying Kaolin clay, pyrethrins, and insecticidal soap. Permethrin is another effective control for pickleworms.

With some work, pests on your home garden zucchini plants can be controlled without using harsh pesticides. Enjoying tender zucchini dusted with salt and spices on your backyard grille during the summer makes the effort worthwhile.