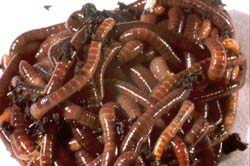 Some years ago I lived next door to a fire chief. One morning after a spring rain, I was driving to work when I saw my neighbor bending over his driveway, gently picking up earthworms and putting them in an old coffee can. I had to stop.

He said he was saving them from drowning, and he seemed pretty pleased about how many worms he had collected — close to 100 squiggly, slimy nearly “suffocated” worms. Though he may have been mistaken about whether the worms were drowning or just using the puddles to migrate, what he showed me next made my jaw drop.

The fire chief wasn’t just “saving” earthworms, he was breeding worms, hundreds of thousands of worms, in a process more formally known as vermiculture. He took me to his basement, where he had set up four 4 by 8 foot raised beds of compost with more than 100,000 worms per bed. Each bed was covered with cardboard sheets that extended to within 2 inches of the edge of the bed. He had lights overhead shining down on the beds. Since worms prefer to work in the dark, the exposed gap around the edges was enough to keep them in the beds. Until.

Until his wife went to the basement to retrieve something from the freezer and accidentally turned the lights off when she left. The next morning when the fire chief went down to the basement to check on his worm farm, half a million squiggly, slimy worms covered the entire basement floor, all looking for a way out.

You may not want to operate a worm farm on the scale of my fire chief neighbor, but vermicomposting, a process for composting organic kitchen and garden waste into a black, earthy-smelling, nutrient-rich humus using earthworms, can be a good addition to your garden plan.

Earthworms in nature create tunnels by burrowing, which aerates the soil to allow air, water, and nutrients to reach deep within. The worms enrich and improve soil for plants, animals, and even humans. Earthworms used in your composting operation thrive more on the surface, and the soil they eat has organic matter such as decaying vegetation or leaves. Plants cannot use this organic matter directly. After organic matter is digested, the earthworms release waste from their bodies called castings. Castings contain many nutrients the plant can use.

There are some cautions about composting with worms. You will want to be sure you are using the right kind of worm; that can be available commercially or from a generous neighbor who already has a vermicomposting operation. Nightcrawlers and other native worms are not appropriate because they depend on cooler temperatures and an extensive tunneling system to survive. There are over 9,000 species of earthworms, ranging in size from half an inch to 22 feet long, but the one that will help improve soil fertility and is best suited for your vermicomposting operation is the red worm, or Eisenia fetida.

There are five components of a successful vermicomposting operation: 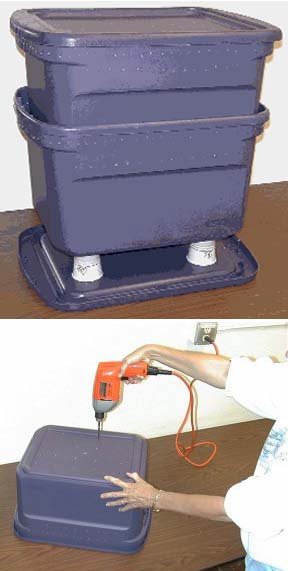 An advantage of “worm bins” over traditional composting is that they can be inside during the winter. Using earthworms to convert organic wastes is an ecologically safe method that leads to an environmentally safe product.

If you decide you want to try your hand at vermicomposting, there are only about seven worms that are best suited for your composting operation. The most common is Eisenia fetida or red worm. Worms you find in your yard or that robins pluck from your garden are not effective composters. There are several commercial sellers of red worms that will sell by the pound, all depending upon how much compost material you will produce in a day. One pound of worms (About 500) will consume close to a 1/4 pound of vegetation in a day.

The following links can provide you step-by-step instructions for establishing your own worm composting program either at home or as part of a school project. It can be a great way to turn organic kitchen waste into rich soil enhancement throughout the winter. It works faster than other composting methods. Your earthworm composting effort will help you create rich, healthy soil for your garden. The project can get children and others interested in gardening and help them develop an understanding of how decomposition works and the important role worms play in the health of our environment.