Sow Your Seeds Outdoors –- in Winter! 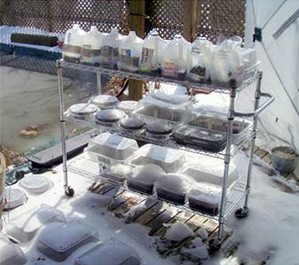 Were these the words of Dr. Frankenstein, upon hearing the beating of his monster’s heart? No, they were mine, after peering into a milk jug and discovering that tomato seedlings were sprouting inside.

Although I was skeptical, this method of winter sowing intrigued me. Could the seeds really survive freezing temperatures and excessive moisture from snowstorms? Perhaps poppies could, as those seeds like to be sown in fall and benefit from exposure to cold. And perhaps feverfew, bachelor buttons, cilantro and dill could. After all, the seeds from these plants, like some others, fall to the ground, survive winter, and happily pop up again in spring. But I had doubts about carrots and spinach, and I certainly never expected success with tomatoes and peppers — seedlings that are especially finicky about soil temperature and moisture and require the kind of close attention that newborns do.

However, I did some investigating and found that agencies including the United States Department of Agriculture have started to recognize winter sowing as a bonafide practice. So, adventuresome gardener that I am, I decided to give it a try, following the steps described on the website, Winter Sown. In January, I planted seeds for turnips, beets, tomatoes, cardinal climber vines, and poppies inside of milk jugs and put them outside. By April — without any other intervention on my part — all the seeds had sprouted except the tomato seeds. But I left the tomato jug as it was, and by May I had tiny seedlings in it as well. They were much smaller than the tomato seeds I had started conventionally indoors, but I planted them in my garden anyway, and they soon caught up. By the time the tomatoes were ready for picking, the winter-sown plants were as big and as prolific as the plants sown indoors.

My experiment showed me just how easy and practical winter sowing is. Germination rates are high, and space requirements are low. With winter sowing, you can forget positioning endless seed trays under grow lights and trying to find space on sunny windowsills for the seedlings.

If you’d like to give winter sowing a try, here are the basics:

First, decide which seeds to winter sow. Seeds that will most likely germinate successfully are those that are cold hardy and typically planted in late winter or