Spread the Warmth, Sunny Side Up 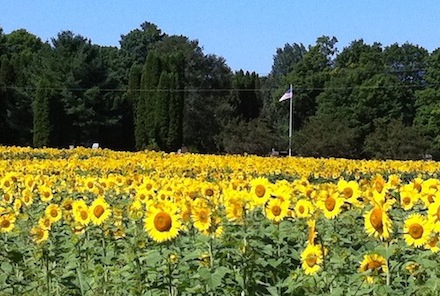 The common sunflower, Helianthus annuus, with its large, vibrant sun-yellow flower head sitting atop a tall, erect stalk, delights gardeners of all ages, inspires artists and flower arrangers, and provides a valuable food source for people and wildlife. Its genus name comes from the Greek words helios meaning sun and anthos meaning flower. The epithet annuus means it is an annual plant. Not only does its flower head resemble the sun with its many yellow rays, but when the plants are young, they will turn to face the sun and track it throughout the day, a process known as heliotropism. Once the plant matures, it faces east. It is quite a sight to come across a field of sunflowers, all facing in the same direction and appearing to stand at attention as the sunflower’s strong leafy stem is unbranched.

A sunflower is actually composed of 1,000 to 2,000 tiny flowers joined together. The flowers in the center, or disk flowers, have both male and female parts. They produce the well-known, nutritious seeds. The outer petals, or ray flowers, do not have reproducing parts. The common sunflower usually grows from 5 feet to 10 feet tall.

Sunflowers have had an interesting history. They are native to North America, and evidence suggests that they were first cultivated as a single-stalk plant by Native Americans in areas of present-day Arizona and New Mexico about 1000 B.C. Archeological evidence suggests they may have been cultivated before corn in this part of the Americas. 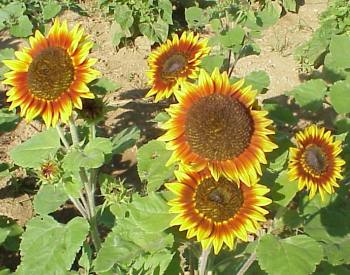 Seeds were ground into flour for cakes or bread. Some tribes mixed the seeds with corn and vegetables. Purple dyes from the seeds were used for coloring textiles, body painting and other decorations. The sunflower oil was used for breads and for skin ailments.

The exotic sunflower was found and taken back to Europe by the Spanish explorers about 1500. The plant was used as an ornamental, but eventually made its way eastward to Russia. There, during the 19th century, sunflowers were first admired as ornamentals, but literature in the 1700s mentions sunflower oil production. The Russian Orthodox Church allowed its use during Lent while forbidding other oil foods, increasing its popularity. 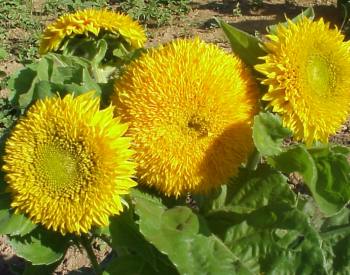 Government research encouraged breeding programs to increase yields and production as a farm crop. Going into the 20th century, seed catalogs in this country began advertising ‘Mammoth Russian’ sunflower seeds. Immigrants to the U.S. helped fuel the interest in sunflowers for seed production, and soon sunflower oil processing plants sprang up in the upper midwest and Canada. European demand for oil, where it is used more than in North America, helped increase the growing U.S. industry.

Hybridization and breeding programs continue today as sunflowers are recognized as an important food source and commercial crop. Sunflower oil is considered a very desirable oil due to its light color, level of unsaturated fat and lack of linolenic acid, bland flavor and low smoking — perfect for many healthy foods requiring oils for frying. It is frequently found in snack foods and as an ingredient for margarine.

The common sunflower is easy to grow in a range of soils from average, well-drained, moist soil to poor, dry soil, although 1 inch of water per week is recommended. However, as the name implies, they must have full sun for optimal growth and flowers. Plant sunflower seeds in the spring after danger of all frost, which in this area is usually between April 10 and April 21. However, sunflowers can be planted in cooler temperatures, as they can germinate from cool soils as low as 46 degrees Fahrenheit and mature plants can withstand temperatures down to 25 degrees Fahrenheit. They can be successively planted and will flower until the first fall frost around November 8 to November 28 in our area. There is still time to plant sunflowers! 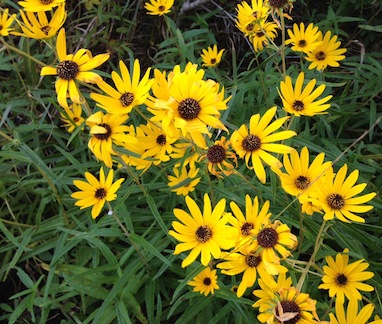 Because of their large size, these tall plants should be planted in a location sheltered from strong winds, or staking may be necessary. Also, it is important to thin seedlings when they are a few inches tall to about 2 to 3 feet apart, so the mature plants have the space they need. Cutworms or slugs may chew on young plants, so placing a cardboard collar around them may be beneficial. While sunflowers are relatively free of diseases and pests, they can suffer from rust, leaf fungal spots and powdery mildew.

Don’t have the room in your yard or garden for the common sunflower? Don’t worry. The annual sunflower has been hybridized and crossed extensively, so there are numerous cultivars from which to choose in myriad colors from dark red to ivory, and many sizes from jumbo plants to truly dwarf ones. In one trip to the seed section of Home Depot, we found the following varieties listed below by size. 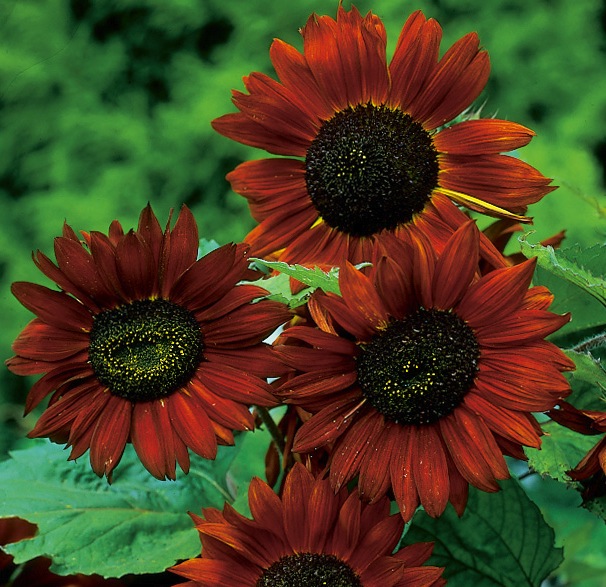