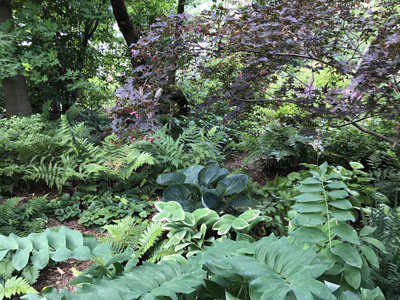 As a gardener, I have long embraced shade gardening, as the neighborhood we moved into over 30 years ago is very wooded and mature trees abound. The areas under the trees, for the most part, were planted with English ivy as an easy, low-maintenance ground cover. It wasn’t until we had lived in our house for several years that ivy lost its popularity and gained the status of an invasive. And invasive it is! Gradually, we began to remove the ivy and replace it with plants that thrive in the shade. Unlike gardening in full sun, shade is a more variable light condition. There are many kinds and degrees of shade.

One only needs to think about the shade garden in winter and early spring, before the leaves emerge on the trees. During these seasons, there will be much more sunlight in the garden. During the growing season, there may be more sunlight on the edges of the bed and filtered light that flows down through the leaves. What is certain is that there are more light conditions than full sun, partial sun/partial shade and full shade, the designations usually found on nursery plant tags. The University of Illinois extension defines full sun as six or more hours of direct sunlight a day; partial sun as between four to six hours a day; partial shade as less than partial sun but two to four hours of sun per day; and full shade as less than two hours of sunlight a day.

Within the designation of shade, there are many degrees of shade. Ken Druse describes them as follows:

Gauging the amount of sunlight an area receives can be challenging. In my own shade gardens, I have places that receive direct morning sun, filtered mid-day sun, dappled sunlight all day and late afternoon sun. The fact that you have to observe the light patterns in your garden and adjust your plants accordingly is a process we gardeners all undertake. Fortunately, many plants are quite adaptable to the “shades of shade” and will succeed in varied light conditions. I have found through trial and error and close observation what plants do well in particular places. Like many gardeners, when I find a plant that is happy in a place, I plant more.

We now have several shade gardens on our property. In the front yard under a star magnolia tree (Magnolia stellata) and a saucer magnolia tree (Magnolia soulangiana), I finally got to plant lily-of-the valley (Convallaria majalis), a plant whose sweet fragrance takes me back to my childhood in Wisconsin. With no effort, it has spread beautifully under the shade of those two trees. It is accompanied by several different Hostas, sweet woodruff (Galium odoratum), toad lily (Tricyrtis hirta), and Epimedium, commonly known as bishop’s hat or barrenwort. Unfortunately, the toad lily is an aggressive spreader, but it offers its flowers late in the summer when little else is blooming, and its orchid-like blossoms are quite showy. However, I do have to mindfully spray Liguid-Fence to ward off the deer, as they particularly like hosta and toad lily.

What is now a lush and varied shade garden in the backyard began as a large tangle of ivy beneath a mature flowering crab apple and some flowering plums. We removed a struggling evergreen magnolia (Magnolia grandiflora) and planted a Japanese maple (Acer palmatum) and encouraged a red oak (Quercus rubra) that was a volunteer. After removing the ivy and enriching the soil, which I continue to do each year with Leafgro and homemade compost, we began planting shade plants. Hostas, ferns and Astilbes form the majority of the plants. All three of these plants have so many varieties from which to choose and their heartiness makes them easy to grow. The blue-green hostas and lime-green hostas are mature and elegant in the garden. Their sturdiness and round forms contrast so nicely with the more upright astilbes. I have red, pink and while delicate astilbes that almost act like a groundcover, and bright tall, feathery pink astilbes that bloom in the shadows at the back of the garden. There are four kinds of ferns. Their fiddle heads are wonderful to observe in the spring. Autumn fern (Dryopteris erythrosora) adds wonderful color in the spring, turning from coppery bronze to green. 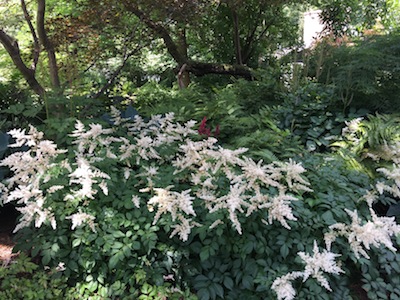 Over time, as I’ve learned more about shade plants and gardening, we added white azaleas to add structure to the back of the garden along with a graceful Leucothoe and a mature Pieris japonica, whose new red leaves are a wonderful contrast to the shades of green. I have found that three lace-leaf Japanese maples, one red and two green, planted on the edges of the garden get enough light to flourish and are focal points. Among my other favorite shade plants are lady’s mantle (Alchemilla mollis), an old-fashioned plant whose pleated leaves and chartreuse flowers are lovely in the front of the garden, and two kinds of Solomon’s seal (Polygonatum) that bear delicate white bell-shaped flowers and gently curving foliage. I favor lungwort (Pulmonaria officinalis) for its silvery mottled leaves and blue-pink spring blossoms. Hellebores are a staple in my garden as they will tolerate shade as well as part-sun conditions. Their early blooms are long-lasting and their striking evergreen leaves add further contrast in the garden. They do well in transitional areas. There is also a large patch of Tiarella cordifolia, foam flower, and Phlox divaricata, woodland phlox. I’ve been nurturing coral bells (Heuchera) on the edge of the garden where they receive morning sun and afternoon shade. Their foliage offers such an array of colors that I hope to plant more. These plants, along with so many other shade plants such as hosta and astilbe, can be easily divided and replanted, thus creating flow and repetition in the garden. 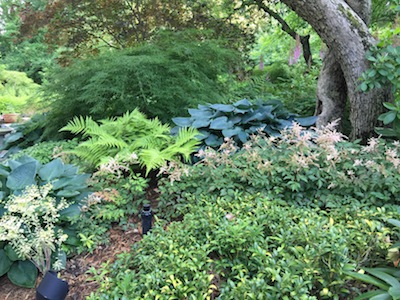 I find shade gardening to be especially rewarding throughout the spring, summer and fall. Each season offers a different landscape to admire. I’ve had virtually no problems with insects of any kind, and now that the garden is mature and full, there are only wonderful textures, varied forms and cool colors to provide a soothing reprieve from the heat and humidity of summer. The fall colors are also wonderful with so many hues of yellow, gold and red.

In his beautiful and informative book, The New Shade Garden: Creating a Lush Oasis in the Age of Climate Change, Ken Druse believes that “the garden of the future will be the shade garden.” He argues that as global average temperatures keep rising, we will have more reason to seek shelter from the sun and “for the sake of our health and of the planet’s,” we will need to plant more trees and create spaces that are more like adapted natural woodlands. We each need to do what we can to create more ‘lush oases’ in the shade. So, if you haven’t already, embrace the shade!

Resources
• The New Shade Garden: Creating a Lush Oasis in the Age of Climate Change, 2015, by Ken Druse
• Why the Shade Garden Is So Underrated — and How to Create Your Own, Adrian Higgins, The
Washington Post, June 14, 2017
• The Serenity of a Shade Garden, Adrian Higgins, The Washington Post, April 29, 2015
• Gardening in the Shade, Deborah L. Brown, University of Minnesota Extension, 2009
• Stepping Stones to Perennial Garden Design, Sunlight, University of Illinois Extension
• Shades of Shade, The American Gardener, May/June 2017
• New York/Mid-Atlantic Gardener’s Book of Lists by Bonnie Lee Appleton and Lois Trigg Chaplin