How to Grow Succulents from Leaves 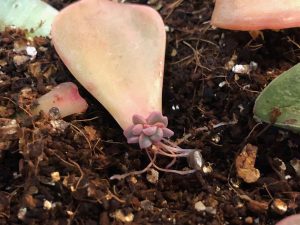 Succulents are plants that have some parts that are more than normally thickened and fleshy, usually to retain water in arid climates or soil conditions. Jade, Christmas cactus and snake plant are examples of succulent plants. Aloe does not root from leaves alone; it requires an offshoot to reproduce. My fascination with them began when I saw several succulent leaves on the floor of a big box store. I took them home and put them in a pot of soil already planted with annuals and forgot about them. It was a delight when new leaves sprouted. All summer long, when the new leaves were big enough, I poked them into the soil, and they grew too.

Winter arrived as it always does. After record-setting rains during the outdoor garden season, I felt the need to garden indoors. Succulents came to mind. Many stores had stocked succulents for the holidays, with a remarkable variety of forms, shapes and colors. I was inspired to buy leaves which I found on the internet.

Knowing these plants dislike too much water, I used four different types of soil. I tried a regular potting soil container mix and a cactus and succulent mix. Both are readily available commercially. I used cocopeat alone. Cocopeat, made from shredded coconut hulls, is available as compressed blocks that greatly expand with water. I also tried a mixture of regular container mix potting soil with vermiculite and cocopeat, all in equal proportions.

At first, I thought I would need to dip the bottom of the leaves in rooting hormone and create a greenhouse environment by planting them in plastic bags. I used regular container mix potting soil. Rooting was successful, with few casualties. Moss grew on the top of the soil but seemed to have little to no adverse effect.

I bought many different leaves and tired-looking succulents. I looked to simplify the rooting process. A double fluorescent light with no particular characteristics was chosen as my light source. It was located in a heated area of the house. Plastic and aluminum trays, some with drainage and some without, were filled to 2 inches deep with the different soils. I poked some of the leaves into the soil, and others I put on top of the soil. I watered the trays gently and lightly with warm water and a watering can with a shower head. Then they were placed under the light. After a week, they were bone dry, so I watered them again in the same way as before. About four days later, I sprayed them well