Powdery Mildew — Can We Defeat It? 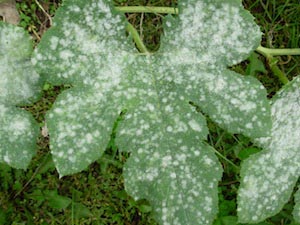 Recently, I discovered the sudden onset of a fungus in my community garden plot when checking on my yellow squash and zucchini. Almost overnight, the fungus appeared as a white, powdery coating, resembling a dusting of talcum powder, on many of the leaf surfaces. The next day or so, the powdery mildew continued to spread to nearly cover the larger leaves with white blotches. My plants seemed to be struggling, but the vegetables on the vines were unaffected. What caused this? I thought that I had given my plants enough growing room and sun, but there must be other factors.

With high humidity and cooler evening temperatures occurring in our area in late summer, powdery mildew will likely affect many plants in our vegetable gardens. Cucurbits (squash, melons, cucumbers and pumpkins) are usually the most vulnerable, although this fungus can also infect beans, okra and peas. Late summer temperatures of 68 to 80 degrees are ideal for powdery mildew to take hold. During a dry summer day, the spores called conidia spread in the air from other infected crops in the area, sometimes traveling long distances. Then on a cool, humid night, the spores that reached your garden can absorb enough moisture to result in a fungal infection. Dew and fog may also play a role in this. Whitish-gray, powdery strands called mycelium begin to form on the older, upper leaves and then spread to the front and back of other leaves, and to the petioles and stems. As the fungus progresses, white blotchy areas form, covering the entire leaf surfaces. Cucurbits are more susceptible to powdery mildew two to three weeks after their leaves open and less susceptible without vegetables on their vines. Infected leaves will turn yellow or brown and shrivel up, although powdery mildew is rarely lethal. 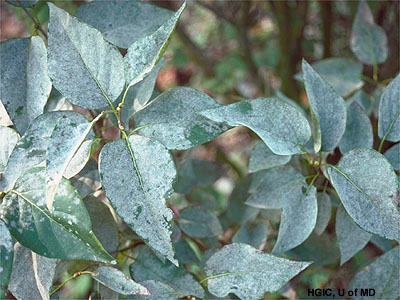 To prevent powdery mildew, it is important to plant resistant varieties of vegetables. Space your plants far enough apart to allow air to circulate. You can stake your cucurbits upward to give them more room. Crop rotation is also important to avoid this problem next year. Be sure that your plants are receiving at least six hours of sunlight each day. Keep excessive garden weeds under control. If you decide that a preventative treatment is needed, neem oil is a good choice, applying it thoroughly at the onset and every seven days. However, it will not cure the existing fungal infection, but will prevent further spread to other plants. 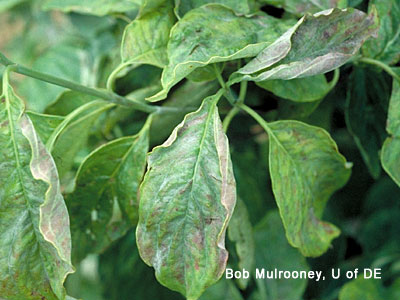 The practices that I mentioned above of proper air circulation, plant spacing, adequate sunlight and planting resistant varieties will also prevent powdery mildew from forming on your trees and shrubs. It begins in the same way with a whitish-gray powdery-like growth of mycelium on leaf surfaces, young stems, shoot tips, flower buds and blossoms. The fungus blocks the light on all affected parts of the plant and prevents proper photosynthesis. Leaves will yellow and become distorted, and flowers may abort. Young plants in deep shade are usually the most affected. The conidia overwinter in bud scales. Some ornamentals that are more susceptible to powdery mildew are Crape Myrtle (Lagerstroemia), Dogwood (Cornus), Rhododendron, Rose, Lilac (Syringa), Japanese and Wintercreeper Euonymous, Hydrangea and Magnolia. Treatments of sulfur, neem oil, and jojoba and sesame oils are recommended to prevent the spread of infection, but will not cure the fungal problem. 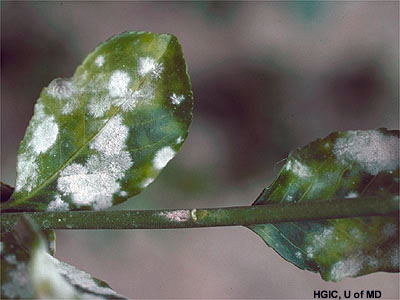 Annuals and perennials can also become victims of powdery mildew. Those most susceptible include Aster, Bee Balm (Monarda), Chrysanthemum, Dahlia, Dianthus, Impatiens, Phlox, Verbena, Pansy and Zinnia. Try to find more resistant varieties of these flowers for your garden. Site them with the proper amount of sunlight for their species. Don’t place them too close together, and prune them if needed to allow air to circulate and to reduce humidity.

Houseplants, including African Violet, Begonia, Jade, and Kalanchoe, can also show signs of powdery mildew. Avoid overcrowding them and provide adequate sunlight. Do not mist these plants, and avoid wetting their leaves when watering. Remove and dispose of infected parts, and isolate these plants from others at the first sign of the fungus. Most fungicides cannot be sprayed indoors, so cultural changes are best for them.