Be Wary of the Invasive Porcelain-berry 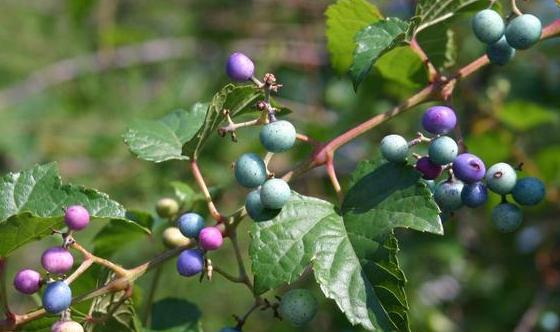 Like a number of other invasive plants, porcelain-berry (Ampelopsis glandulosa var. brevipedunculata) was introduced to the U.S. as a desirable ornamental landscape plant. It’s easy to see why. Its fall berries are stunning in speckled shades of pink, blue, lilac and purple. Unfortunately, despite its beauty, its debut here was a terrible mistake. Porcelain-berry is now near the top of any Mid-Atlantic’s “worst alien invaders” list.

Porcelain-berry is a woody, perennial vine with simple, alternate, broadly ovate, dark-green leaves. These vary from heart-shaped to slightly lobed to deeply cut with pointed tips and coarsely toothed edges. The number of lobes also varies from three to five. Leaves measure up to 4 inches wide and 5 inches long. The undersides are slightly hairy to the touch, especially along the veins. 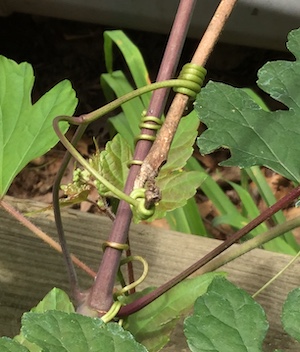 Porcelain-berry climbs by slender, two-pronged tendrils that grow directly opposite the leaves on new stems. These tendrils wrap themselves tightly around branches or other structures to firmly anchor the vine as it continues to grow.

At first glance, you might think the vine is wild grape because of the similarity in leaf shape and twining habit. You would be wrong, although understandably so, as the resemblance is close enough to fool most of us without further examination.

Obviously, the unusual, multi-colored berries are a dead giveaway in identifying the vine, but these do not appear until the fall. From June to August you can rely on porcelain-berry’s flowers to make an identification. These are small and inconspicuous, greenish-white in color, and arranged in compact upright clusters like an open umbrella. The flowers of wild grape bloom in early summer and in elongated hanging clusters. 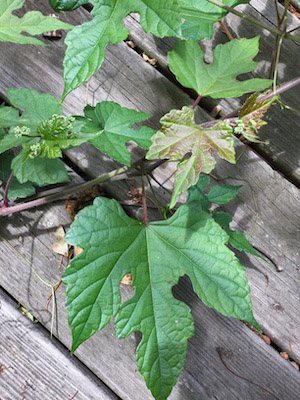 If there are no flowers and no berries, then look to the vine itself. Wild grape has a straight, shaggy bark that will peel off in parallel lines, while porcelai