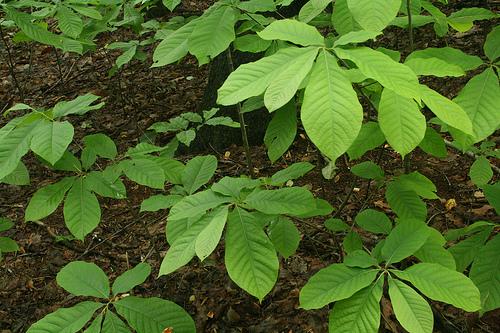 Pawpaw (Asimina triloba) is the correct answer! This small, deciduous tree is native to the eastern and central United States, and its range extends from northern Florida to southern Ontario and west to eastern Nebraska. It is the only North American member of a tropical family of trees, Annonaceae, or the custard-apple family.

It typically grows to about 20 to 25 feet tall. An understory tree, it thrives best in moist, fertile soil that is slightly acid. As a seedling or very young tree, it needs shade for the first two years. Young trees are sensitive to bright sunlight. While it can grow in shade, it will produce the most fruit with full sun. Many new cultivars have been developed that tolerate a wider range of soil conditions and produce larger fruit. 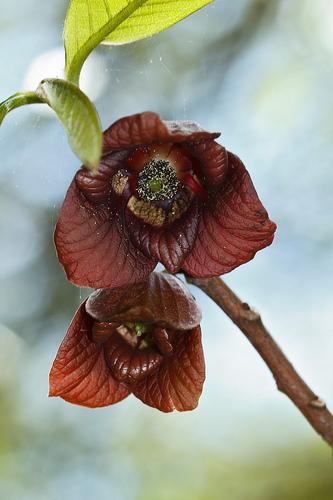 Although small in stature, its droopy oblong leaves are large, 6 to 12 inches long, and turn yellow in the fall. The maroon-colored flowers appear in early spring and hang upside-down. The triloba in its Latin name refers to the flower’s three petals. Each flower has several ovaries that develop into a fruit cluster from September to October. The flower has a rank odor and is pollinated by flies or beetles, not bees.

Its most distinguishing attribute is its fruit, reputed to be the largest native edible fruit in America. It produces clusters of large, mango-like “berries” whose taste has been compared to that of a banana, a mango, a pineapple or a combination of the three. I’ve never tried one, so I can’t confirm which fruit taste is most prominent. However, its flavor is described as delightful and unique. The yellowish-green fruit ripens to brownish black; its flesh is bright yellow to yellowish brown. The fruit is nutritious and contains high amounts of vitamins A and C as well as potassium.