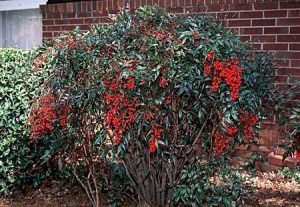 Nandina domestica, commonly known as sacred or heavenly bamboo, is a broadleaf evergreen shrub that produces bright red berries. It is frequently found in residential and commercial landscapes and is often used in mass plantings. Tough and durable, it tolerates a wide range of growing conditions from full sun to full shade and is adaptable to many soil conditions. This easy-to-grow shrub is also deer resistant. Nandina domestica resembles bamboo, from which it takes its common name. Its glossy tri-pinnately compound leaves, upright growth habit, along with its tendency to produce suckers or canes, resemble bamboo. However, Nandina is a member of the barberry family and is native to China, Japan, and India. 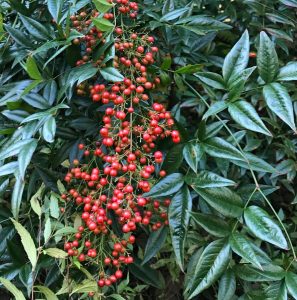 As a gardener, I confess to loving Nandina, but I am reconsidering its place in my yard after learning from a friend that its berries are toxic to birds and other animals. In addition, this non-native plant is now considered an invasive species. The U.S. Department of Agriculture and most states now classify Nandina domestica as a “noxious, non-native, invasive weed” as it can escape into and invade natural areas.

A search on the Internet quickly turned up the 2010 report from the College of Veterinary Medicine at the University of Georgia. After dozens of cedar waxwings were found dead in Thomas County, Georgia, researchers at the College found that the cause of their deaths was cyanide poisoning from Nandina berries. The berries were the only food found in their crops. The berries contain cyanide and other alkaloids that produce highly toxic hydrogen cyanide that is extremely poisonous to all animals. It caused hemorrhaging in the birds’ organs. It is a painful and unnecessary way for birds to die. Bird deaths have also been reported in Houston, Texas, and other parts of the country. 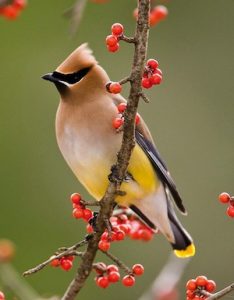 Nandina berries persist on the plants throughout the winter when food is scarce for birds and other wildlife. Cedar waxwings migrate from their breeding grounds in the northern United States and southern Canada into the southern regions in large numbers. They are known to be voracious feeders and to consume large quantities of berries at a time. I am always delighted when I see them here in the winter. They are not the only birds that depend on winter fruits for food. Robins, mockingbirds and other birds do as well. While the cedar waxwings studied by the veterinarians at the University of Georgia had gorged themselves on Nandina berries, the potential for toxicity to other birds who eat these fruits certainly exists, especially when other food is not available and if the birds consume large amounts of berries.

So, what is a gardener and bird-lover to do? The easiest thing to do if you have Nandina in your yard is to cut off the berries and now is a good time. The berries have not yet turned their enticing bright red. Another consideration is planting more native plants that provide food for birds and other wildlife in the winter. As Nandina is an invasive species, choosing native plants to replace it is a good idea.

The National Audubon Society’s website is an excellent resource for finding bird-friendly native plants, tailored to a specific geographical area. For Northern Virginia, their experts recommend 142 trees, shrubs and perennials that support not only birds, but other wildlife. Among the shrubs they recommend that could be planted in place of Nandina are Allegheny Serviceberry (Amelanchier laevis), Black chokeberry (Aronia melanocarpa), American witch hazel (Hamamelis virginiana), American holly (Ilex opaca), Black raspberry or thimbleberry (Rubus occidentalis) and winterberry holly (Ilex verticillata).

I do plan to cut the berries off of my Nandina, as it turns out that it is not such a heavenly plant! The harm the berries certainly pose to cedar waxwings and could potentially pose to other birds or wildlife greatly outweighs having the berries remain on the plants. I also plan to continue to plant more native shrubs, trees and perennials in my garden. Not only do we grow plants as gardeners, but we also grow as gardeners, too. We continue to learn more about how to create sustainable landscapes and healthy ecosystems that best support wildlife through the choices we make in our yards and gardens.