Monarda in Your Pollinator Garden 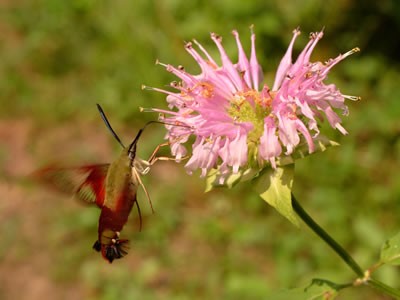 Monarda makes a great addition to your garden since it is resistant to deer and rabbits, which are prevalent in Fairfax County. It is a great native pollinator plant since it attracts bees, butterflies, moths, hummingbird moths and hummingbirds. Monarda is a larval host to the hermit sphinx, orange mint moth and the raspberry pyrausta moth.

Monarda grows well in zones 4 to 9 and blooms from spring to summer with a blossom size of 1 to 3 inches. It is a deciduous perennial in the mint family that requires very little maintenance. The square stems identify Monarda as being in the mint family, and its leaves have a minty fragrance when they are crushed. It grows 2 to 4 feet tall and blooms for up to eight weeks. Its blooms are found on top of the plant and are slender tubular flowers. It is an erect clumping herbaceous herb with opposite leaves.

As with a number of plants in our area, deadheading spent flowers will help to prolong bloom time. It spreads by self-seeding and rhizomes, so deadhead to help control the spread of Monarda. It is a plant that can spread quickly by underground stolons. Thus, it may need to be divided every two to three years. It is best to do this in the early spring as soon as the plants emerge from the ground and then replant immediately. It may be propagated by division, seed and leaf cuttings. Every division should have two to three good shoots. 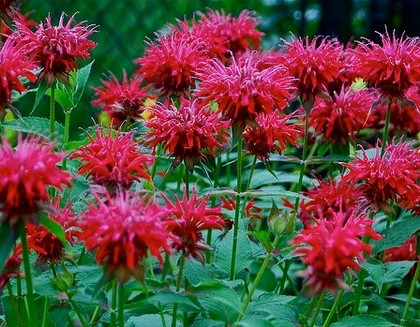 Monarda thrives in moist well-drained soil and full sun of six hours a day, but it will tolerate some shade. It also likes clay soil prevalent in our area with some organic matter added to the soil.

Tip: Be careful not to crowd Monarda, and do not water your plants overhead to prevent powdery mildew. Planting 2 to 2 1/2 feet apart will help prevent this. Also, fungicides can be used to control powdery mildew. Be sure to follow the instructions on the label. When planted in partial shade, Monarda is more prone to developing powdery mildew and will not produce as many flowers.

These Monarda varieties are more susceptible to powdery mildew: ‘Beauty of Cobham,’ ‘Croftway Pink,’ ‘Mahogany,’ ‘Mrs. Perry,’ ‘Prairie Fire,’ ‘Snow Queen,’ ‘Adam,’ ‘Aquarius,’ ‘Cambridge Scarlet’ and ‘Prairie Night.’ While these varieties have beautiful flowers, they become unsightly in mid to late summer since they are prone to powdery mildew. 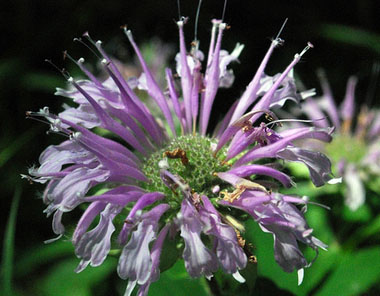 Do provide moisture throughout the growing season, so water every few days to a depth of 6 to 8 inches. Mulch may be added to reduce the frequency of watering. If the soil is allowed to dry out, it will stress the plants and make them more susceptible to disease. Apply a small amount of 10-10-10 fertilizer early in the growing season, being careful not to over fertilize. Over fertilization may also increase the possibility of powdery mildew. The powdery mildew fungal spores can overwinter in and on diseased plant debris. That is why we need to remove and destroy diseased plants and debris in the fall. This will remove the source of next year’s infection.

Tip: The Raspberry Wine variety is one of the least susceptible to powdery mildew. Several other varieties are resistant to mildew. They are ‘Marshall’s Delight,’ ‘Gardenview Scarlet,’ ‘Violet Queen’ and ‘Colrain Red.’ 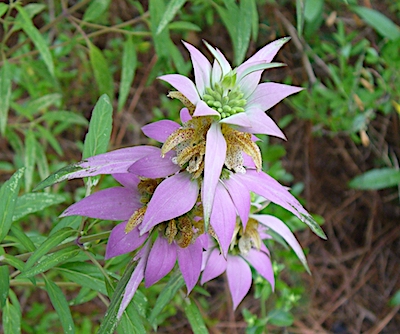 The blossoms of Monarda are edible. The plant resin can be used to soothe bee stings, and parts of it may be used as an herbal medicine. Some people use it to make herbal tea known as Oswego Tea. The name Oswego Tea is from the Oswego Indians of New York, who used the leaves of the Monarda plant to make tea. It can also be used to make flavored jellies, soups, stews and fruit salads. Its fruit is a brown copper color and appears in the shape of ovoid nutlets that are present from September to October.

There are three species of Monarda: Monarda fistulosa, Monarda didyma, and Monarda punctata. Each has its own characteristics, as shown below:


Monarda provides contrast and a variety of colors for perennial gardens. It comes in white, pink, red, lavender and purple. I find that hummingbirds are readily attracted to the red Monarda, and they compete with bees for the opportunity to pollinate the flowers. The red flowers are compact and round with blooms that are 2 to 3 inches in size.

Did you know that Monarda is named in honor of the 16th century Spanish physician and botanist, Nicolas Bautista Monardes? It was given the nickname “Bee Balm” due to the plants’ resin being used to soothe bee stings.