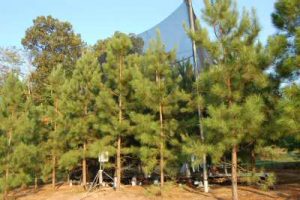 The correct answer is Loblolly Pine (Pinus taeda). This native is found throughout 12 southeastern states along the coastal plain (east of the mountains) from Delaware south to Florida and west to Texas, and is probably the most abundant pine species. It also has other names such as shortleaf pine, fox-tail pine and old-field pine. 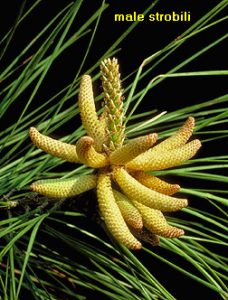 Like other pines, it reproduces by its seed cones. Female flower buds form in October on new growth and remain dormant through the winter until February. Male buds form on old growth, and fertilize the female buds which produce seed cones the following year, ripening and falling during autumn. The cones are oval shaped, about three to five inches long, and have many short, sharp pointed ends.

Years ago, I heard that many people were unhappy with the multitude of loblolly pines in Reston planted when the town was built. Loblolly pines are everywhere because they provided the builders with instant screens and buffers because of their evergreen nature and fast growth. Now years later, another of their characteristics is not so desirable — the tendency to lose lower branches as the trees grow and mature. Once 10-20 feet of lower branches are gone, the trees no longer act as an effective screen.