Five of Our Worst Invasive Plants 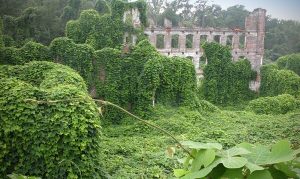 Invasive people, invasive surgery and invasive plants — all are undesirable intrusions. Invasive plants are those growing where we do not want them and growing where they are not part of the native ecological system. That definition includes almost everything we classify as weeds, but invasives have other notable qualities that set them apart from plain weeds.

Invasives are usually introduced to an area or region by human activity — intentionally or accidentally. We have introduced many species into our part of the globe that are native to other places, but only those that are prolific, overwhelming native populations and causing harm are considered invasive. Invasives are noted for spreading prolifically, and for displacing native plant species that wildlife depends on. Invasives are known for highly successful reproduction, seed production and dispersal, which gives them a competitive edge over native species. And many have no natural enemies or predators in their new locations to keep them in check.

The harm they cause can be in the form of economic loss or degradation of systems that depend on the benefits provided by natural species. Samples of degradation include clogging our waterways used for water supplies or boating, and overwhelming native beneficial insect habitat that provide pollination or insect control. Or they provide little value as a food source for humans or livestock.

We find these as the most damaging in our county and surrounding region. 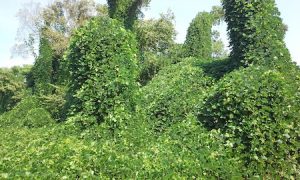 Kudzu
Pueraria montana var. lobata
Kudzu, a trailing vine originating in China, was brought to the United States from Japan as an ornamental plant in the late 1800s. It can grow and cover any of our native plant communities from meadows to forests. Roots can grow to 12 feet long and contain a strong taproot, enabling it to survive disturbance and periods of drought. It is a semi-woody perennial and easily survives our winters. It spreads by sending down new roots from long leaf nodes along stems that develop into new plants in the spring.

With its rapid growth rate and habit of growing over objects, kudzu can outcompete native plants and quickly dominate habitats when established. Kudzu infestations can eliminate forest cover and is a problem in southern forests, becoming more difficult to control with increasing age of infestations. 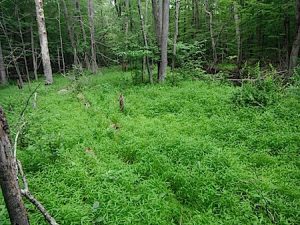 Japanese stiltgrass on a forest floor

Japanaes Stiltgrass
Microstegium vimineum
Japanese stiltgrass is an annual native to Japan, Korea, China and surrounding areas in Asia. It is believed to have been introduced into America around 1918 in Tennessee as packing material for imported Chinese porcelain.

Japanese Stiltgrass is at home in the forest edges, wetlands, and shady, moist, low-lying areas. It spreads by underground root stolens and by seeds. One plant can produce from 100 to 1000 seeds that can live in the soil and germinate for three to five years. It grows into a dense cover that crowds and suffocates our native plants that native wildlife rely on, while providing little or no habitat or food for them. 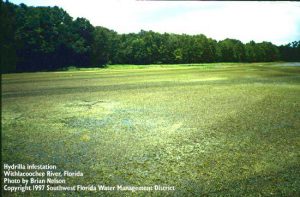 hydrilla in a waterway

Hydrilla
Hydrilla verticillata
This water-borne plant may not be growing in your backyard, but those who spend time on the water are very familiar with it. It came from Asia intentionally as a plant for our aquariums. It ended up in waterways as a result of people who innocently dumped out waste water into streams or ponds that contained small pieces of it. From there, it took off.

It first appeared in Florida in the 1960s where it quickly made its way to streams, marshes, reservoirs and rivers. It is generally rooted into an underwater substrate with potato-like storage tubers. The stems can grow, branch out and form mats along the water surface. It clogs waterways, reservoir intakes, and entangles boat engines. It can shade out other native aquatic plants, alter water chemistry and temperature and choke out fish populations. 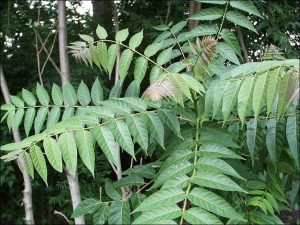 Tree of Heaven
Ailanthus altissima
This rapidly-growing deciduous tree is native from China south to Australia. It was introduced into the United States first in 1784, and was widely used as an urban street tree and planted extensively in Washington, DC and Baltimore. It has since become a common weed in urban and agricultural areas, and easily grows in disturbed, infertile areas where other plants have difficulty. Its extensive root system makes control and eradication difficult. It grows into a tree and resembles a few other trees, but its leaves give off an unpleasant odor when crushed.

The tree is the preferred host of another new invasive, the spotted lanternfly, also imported accidentally from Asia. This insect has been ‘spotted’ in Pennsylvania and recently in Virginia, and has the possibility to inflict great damage on agricultural crops like grapes and apples. Virginia is currently attempting to control its spread. 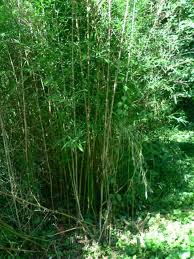 Golden Bamboo
Phyllostachys aurea
Golden bamboo was first introduced to America in 1882. Last year the Virginia legislature voted to designate it as