Native Peppers From Around the Globe

Even though we associate different sizes, colors, shapes, and tastes of peppers with different nationalities and cuisines, they all originate in South America. Upon being exposed to the capsicum plant in the Caribbean, Columbus thought he had come across the peppercorn, and thus called it pepper. Peppers were spread around the world as a spice, mostly by 16th century Portuguese traders interested in the lucrative spice trade. After some time and regional cultivation, new varieties popped up and became integrated into the regional cooking we are familiar with today.

This is the first in a new series which will expose us to new vegetables and ornamentals that may be growing in our international gardeners’ gardens. 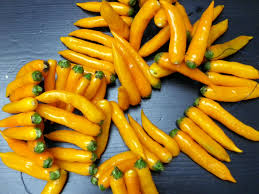 Native South American peppers, Aji Amarillo peppers (Capsicum baccatum) are popular in Peruvian cooking. They can be used fresh for soups and sauces, made into a chili paste, or dried. The smaller Aji ‘Chinchi’ Amarillo pepper seeds were recently introduced in the US and is a cultivar of the larger Aji Amarillo species. ‘Chinchi’ bears fruit much sooner in the season than the larger Amarillo species. The peppers are also considered rare and measure only 3 inches by one-half inch. Aji ‘Chinchi’ Amarillo peppers are fruity and full of flavor with medium-high heat. The peppers develop from green to a golden orange-yellow before harvest in 52 days. The taste is not overwhelming like the other chilies. Plants produce abundantly until the cooler temperatures arrive. 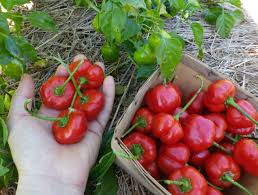 ‘Jasmyn Rissie’ are also Capsicum baccatum chilies that grow well in our region. Their rare seeds were collected in Hartbeespoort, South Africa. They are similar to the more well-known Peppadew chili. ‘Jasmyn Rissie’ peppers are mildly hot with an intense fruity flavor. The heat seems to be concentrated in the ribs and seeds. They grow from light green to red in a lantern shape, measuring 1 ¼ inches by 1 ½ inches. Plants bear fruit prolifically throughout the summer and early fall and take a little longer to ripen than the ‘Chinchi’ peppers, approximately 62 days. ‘Jasmyn Rissie’ peppers can be pickled or made into a relish. 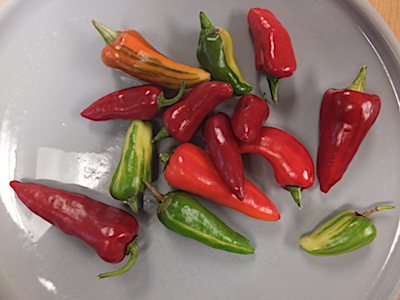 Fish peppers (Capsicum annuum) were brought to the US in the 19th century from the Caribbean and have an African-American popularity with roots in the Baltimore, Maryland and Philadelphia area. They are considered very hot and originally were the hidden ingredients in cream sauces for seafood dishes. These 2-inch-long peppers have green and white variegated leaves and can be striped green-white, green-yellow or red all at the same time on one plant. They look beautiful mixed with flowers in the landscape. Fish peppers can also be dried into very hot chili pepper. 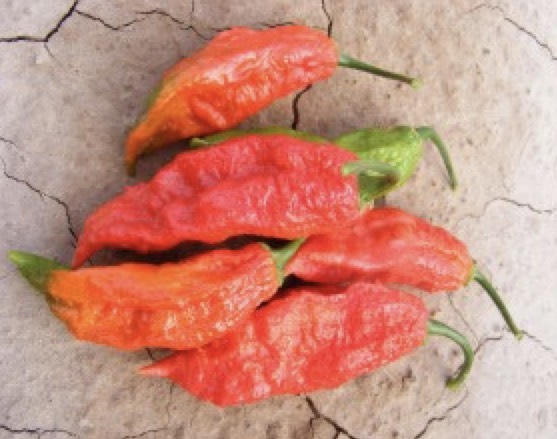 India is known for its spicy foods, and the bhut jolokia pepper is one reason. This chili, cultivated mainly in the northwestern provinces, is one of the hottest peppers in the world. It produces capsaican not only in the vesicles around the seeds as most peppers do, but throughout the entire fruit.

The Bhut jolokia chili, also called the ghost pepper, is a hybrid cross between Capsicun chinense and Capsicum frutescens. Because of this, it does not self-pollinate well. It is difficult to grow because it requires a long hot season — not typical in our area. It needs soil temperatures between 80 and 90 degrees (F) for germination, and can take up to 36 days to germinate. Its long growing season means it takes up to 160 days to harvest.

Bhut jolokia chilies can be used in both fresh and dried forms to spice up curries, pickles and chutneys. In some parts of India, the peppers are smeared on fences or used as an ingredient in smoke bombs as a safety precaution to ward off wild elephants. Chilies are often dried because peppers have a very short shelf life and rot easily when wet. Drying preserves them for storage. 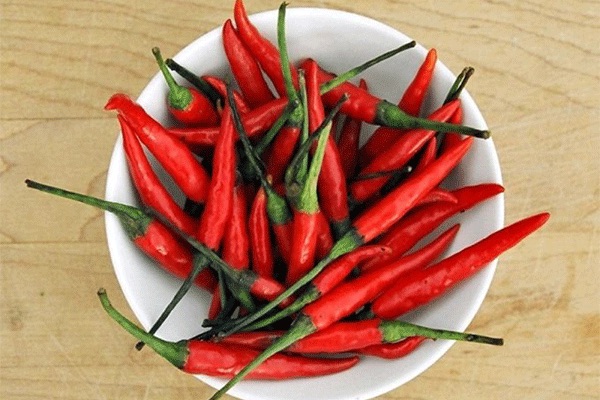 There are over 70 different chili peppers that are grown and used in Thai cooking, but the most common is prik kee noo. Also known as the Red Thai Chili Pepper (Capsicum frutescens) it packs a lot of heat, is small and thin (about 2 inches long), and although used red or green, it is most commonly used red.

These chili peppers are an ingredient used fresh for spicing up stews and curries and in stir fries, and can be dried and used to make sauces for flavorings of other dishes. They are also added to give color to foods, an important factor of Thai cooking. The red chilies give red curry paste its color.

Prik Kee Noo chilies thrive in warm to hot growing regions. They require a relatively long growing season of about 80 days to maturity to ripen. If harvested green and unripe, they require less time, although the red chilies produce more intense flavor.