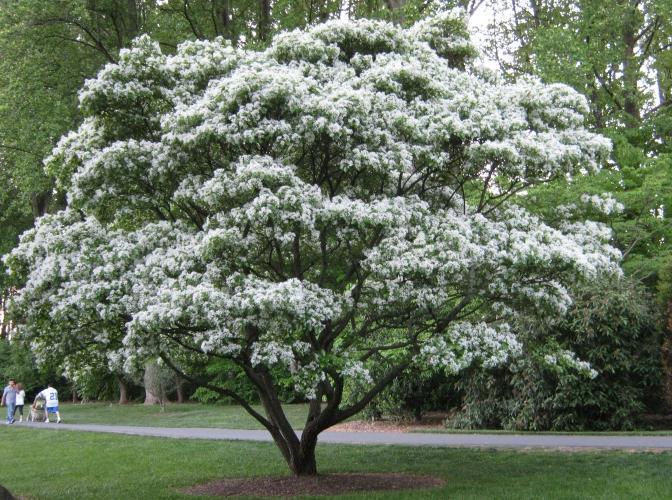 Encountering a fringe tree on a breezy spring day is to see masses of white corollas of petals casting their light perfume across the landscape. Is it any wonder Linnaeus named and noted this genus Chionanthus (chion = snow; anthos = flower) as he compiled the Genera Plantarum (1753)? Less poetically, fringe tree’s common names include Old Man’s Beard, Grancy graybeard, flowering ash and white fringe tree.

Genus Chionanthus is a member of the Olive Family, the Olaceae, which includes 29 genera and over 600 species of trees and shrubs common in southeastern Asia and Australasia. Trees in this genus have uses both practical and ornamental: olive for food, ash for its lumber, and forsythia, gardenia and privets for sheer domestic beauty. In North America, ash trees in the genus Fraxinus, devilwood (Osmantus americanus) and Forestiera (swampprivet) are fringe tree’s near relatives.

Only two species of fringe tree exist: C. virginicus in eastern North America and C. retusus, native to China. In his citation naming fringe tree the Virginia Native Plant Society 1997 Wildflower of the Year, C. F. Saachi explains this geographic disconnect: “This unusual biogeographic pattern, with different species within a genus … separated by several thousand miles, is a product of major geologic events including mountain building and the effects of glaciation. Familiar plants exhibiting this pattern include tulip-poplar (Liriodendron) tupelo or sour gum (Nyssa) and the witch-hazels (Hamamelis).” 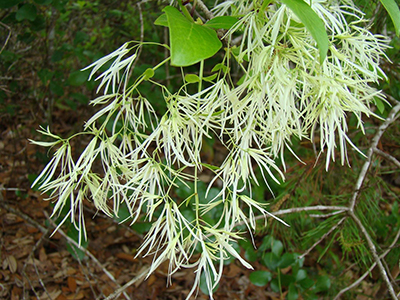 Hardy in Zones 4 to 9, fringe tree is native from Florida to east Texas, north to New Jersey, and south and west to Ohio, Missouri and Oklahoma. In a domestic or urban setting, fringe tree is an exceptional specimen tree. Most common in a variety of wild habitats, it is exceptional for its adaptable habitat requirements and lack of insect and disease problems. Widely seen in mesic to dry upland forests, woodlands and numerous on mafic (dark, igneous rock) outcrops, it is not particular about rock or soil chemistry. Favored locations are small-stream alluvial forests, and wetland or swampy habitats, in full sun or partial shade. In an urban environment, fringe trees range from 12 to 20 feet in height (4-65 m) and width. In the wild, the tree may grow 25 to 30 feet tall (7-9 m) with a similar profile. Post flowering, its irregular open crown, its smooth pale gray and white banded bark, and the multiple slender trunks and shrublike appearance make a fringe tree easily identifiable.

The glory of a fringe tree is the beauty of its bloom. The white fringe tree is dioecious, so a male and female plant must be present to produce berries. The tree sometimes has what are known as ‘perfect flowers,’ where both female and male parts exist on one flower. Each flower is comprised of 4 to 6 strap-shaped petals 1 inch long by 1/16 inch wide (2 long by .5 cm wide) anging in showy, branched clusters 4 to 6 inches long (10-25 cm). Narrow, elliptic 3- to 8-inch long ( 3 to 20 cm) deciduous opposite leaves are medium to dark green with a waxy appearance, emerging late in spring during or just after the flowers bloom. 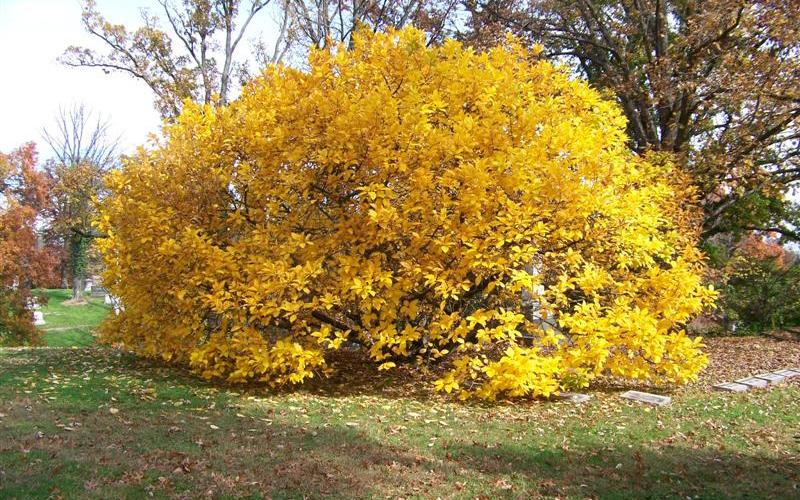 In the fall, bluish-black olive-shaped and single seed fruits are welcome fodder for a wide variety of birds, including wild turkeys. Fringe tree is also a host plant to the rustic sphinx moth caterpillar (Manduca rustica) and supports many pollinators including bees.

Unlike its exuberant spring appearance, the fringe tree slips into fall with a modest show of pale yellow foliage. Overall, its practical and aesthetic contributions to any wild or planned landscape are substantial.