Camping with the Tent Caterpillars 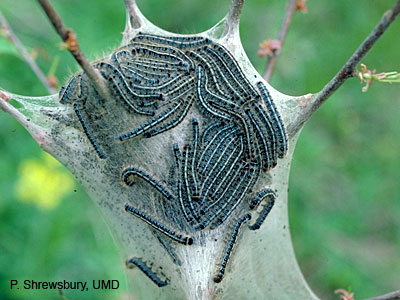 Almost everyone has seen their webbing in the branch crotches of trees around this time of year. When you take a close look, you don’t see many tent caterpillars in the tent, but the tent continues to grow. Like we do on a camping trip, they stay in their tents during the night and on rainy days, and usually hike out to roam around during the day. These are the habits of the Eastern Tent Caterpillar (Malacosoma americana).

The caterpillars start their life hatching from eggs near the time of tree bud growth in March and April. The young larvae, being as sociable as we are, gather together near the fork of the tree limb to begin spinning their web or tent. This is used for protection from birds and the elements as they mature. The tents are unsightly, but rarely cause significant damage to the trees.

Caterpillars eat the leaves on the tree, but seldom cause the tree’s demise. Trees usually recover unless the tree is young or weakened and stressed from other problems. The caterpillars’ favorite foods are all types of cherry trees, hawthorn, crabapple and fruit trees.

The caterpillars bed down in the night and leave their tents during daytime to find food and munch away in the trees. They are fully grown in about four to six weeks, reaching about 2 inches in length. And when fully grown, they crawl to building cracks or nearby protected places to spin their cocoons. In another three weeks, the moths emerge and take wing to mate. 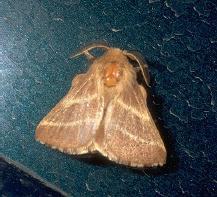 Moths are fuzzy-looking and can be identified by two pale stripes running diagonally down their wings. Females will lay their eggs in a ring around a tree twig. The egg masses contain about 150-350 eggs, and will stay there through winter to hatch the following spring.

This is one of the easiest pests to control without pesticides. And by destroying their tent protection, you also help our feathered friends.