By Helen C. Hollingsworth, Fairfax Master Gardener
Earwigs are red-brown to black and range from 1 to 1.25 inches long with two small pairs of wings. They do not fly but can run surprisingly quickly. 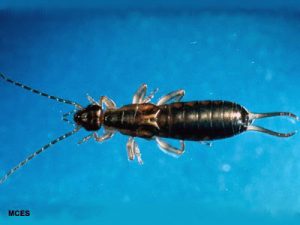 The name “earwig” is thought to have arisen from the false belief that they can crawl into the ears of sleeping people. In some extreme versions of the myth, they can then lay eggs or even drill into the sleeper’s brain. The common aversion to these creatures is probably due to the pincer-like appendages at the tip of the abdomen, which some falsely believe are capable of hurting them. These pincers are used for defense and courtship only. Males have curved pincers while the females’ are smaller and fairly straight.

The female lays eggs in a chamber 2 to 3 inches below the soil surface and guards them, as well as her newly hatched young until their first molt. They have one generation per year, and some adults (and eggs) survive over the winter, tunneling up to 6 feet below ground. 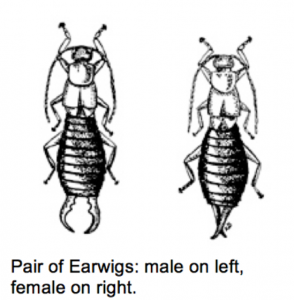 Earwigs prefer living in moist locations with lots of organic matter. They are nocturnal and shelter under stones, debris and other moist, dark spots by day. Most earwigs are primarily scavengers, eating dead insects and decaying plants. Some also eat pests such as aphids, insect larvae and snails. They can, however, become a problem when they feed on flowers, seedlings, vegetable crops, and on roots and foliage of living plants. Usually this becomes a significant problem only when populations are high.