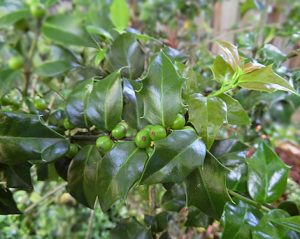 Dragon Lady Holly (Ilex x aquipernyi) may be a good landscape choice if you’re looking for a tall and skinny evergreen. It grows 10 to 20 feet high and only 4 to 6 feet wide. It’s considered hardy to USDA Zones 6 to 8. It’s supposed to grow in full sun, but actually prefers some afternoon shade. A Dragon Lady Holly won’t be happy in a hot southwest location. It tolerates part shade, but it will grow thinner the shadier it gets. It will need to be pruned to maintain a pyramidal shape, or to keep it from getting too thin and wispy.

The foliage is relatively small and is very spiny. For this reason it is considered more deer resistant than many other evergreen hollies. It is a cross between English Holly (Ilex aquifolium) and Perny Holly (Ilex pernyi). Unlike most other holly hybrids, there is no specific male pollinator. In other words, there is no such thing as a Dragon Gentleman. Most references recommend an Ilex merserve ‘Blue Stallion’ or ‘Blue Prince’ as a pollinator. Most references do claim that a Dragon Lady will produce red berries in the Fall if a male pollinator is planted. However, none of the Dragon Ladies I planted six years ago have ever gotten red berries. 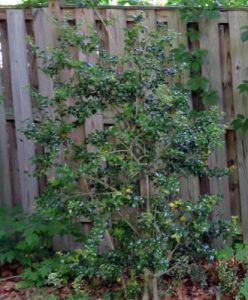 In 2012 I planted five of them along a fence line. They were in 15-gallon pots or balled in burlap, so they were about five feet tall. I planted two ‘Blue Prince’ hollies approximately 150 feet away. They only got about three hours