Beat The Beetles to Grow Cucumbers

By Ray Novitske, Fairfax Master Gardener
Spotted or striped, these native beetles will wreck havoc with plants in the curcubit family, including squash, cucumbers and melons. There are two different beetles that have similar characteristics. Our striped cucumber beetles (Acalymma vittatum) specialize in cucumber and cucurbit family plants, while spotted cucumber beetles (Diabrotica undecimpunctata howardi) are not as picky and are found on other plants as well. The spotted beetle larva is also known as the Southern corn rootworm, because it likes to attack the roots of corn during the mid-to-late season. 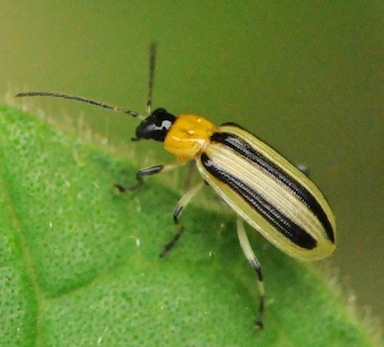 The striped beetle is yellow with three long, black stripes on its back, and a black abdomen. The spotted beetle is slightly larger, yellow or yellowish-green, with 12 black spots on its back. The head is black, and the abdomen is yellow.

Striped cucumber beetles overwinter as adults in ground debris such as dead leaves and plants, and emerge in April to feed and mate. They are especially destructive at this time of year because seedlings are just getting started and are easily damaged. Spotted beetles generally overwinter in the southern states, and head north in late June. However, evidence shows that more are known to stay put for the winter. 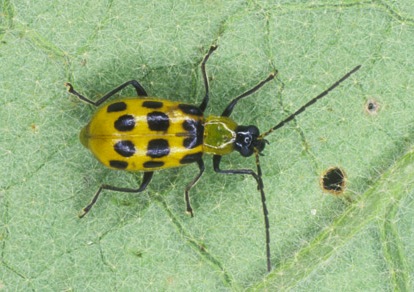 Both beetles lay their eggs at the base of the plant or in the upper cracks in soil. Eggs are oval and pale orange and are laid in groups. They hatch about a week later. Larvae are pale white with dark heads and reach up to 3/8 inch in length, but are rarely seen because they spend their time in the ground feeding on the roots. After two to three weeks, they pupate and emerge.