By Ray Novitske, Fairfax Master Gardener
When we see the term cottony camellia scale, we concentrate on the first two pleasant words “cottony” and “camellia.” They evoke ideas of something comforting and beautiful. But this scale insect that attacks our ornamentals at this time of year is anything but that. 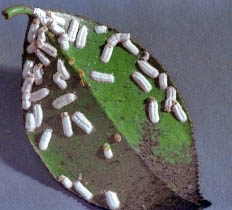 Scale insects are small and do not appear like most other insects since they have no visible legs, heads or wings. There are over 150 types of scales in Virginia that take a liking to trees and shrubs. They are oblong immobile insects that usually park themselves on branches and twigs and feed on a plant’s sap, reducing its strength and health. The cottony camellia scale is no exception.

First, this is not a scale that attacks only camellias. I have seen it on hollies more than any other plant, but it also likes English ivy, yews, euonymus, hydrangea, maples and rhododendrons, in addition to the plant it is named for. In low numbers, the scale does little damage to the plants, But in higher infestations, the plant can end up weakened, its growth stunted, and more susceptible to disease. Because they are so small with adults being less than 1/8 inch long, they can build up large populations before they are noticed. 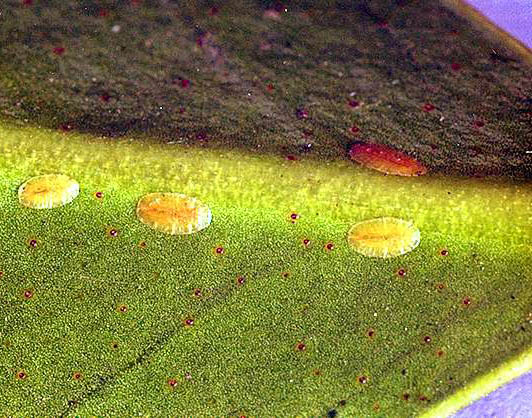 The most visible signs of cottony camellia scale (Pulvinaria floccifera) are the cottony egg sacs found at this time of year. These egg masses are laid by the females on the underside of leaves. Once hatched in May and June, crawlers emerge and are most active and mobile at this stage. Once finding a good spot on the twig or branch, they start sucking out plant juices and eventually lose their legs. As they mature, they develop a waxy coating on their outer bodies to help protect them.

The damage to plants may go unnoticed if the cottony camellia scales are low in numbers. One sign of the damage might include foliage that turns pale green or yellow. Some leaves may develop black spots where sooty mold begins to show up from the