Cold Weather and Your Plants

You may think these are just different names for the same thing — damage to plants due to cold weather — but you would be wrong.

While some of the symptoms may appear to be the same, the long- and short-term damage to your plants is where the difference lies, so I’ll try to sort them out for you.

Chilling injury can best be described as damage to plants caused by rapid changes between the plant’s tolerated high and low temperature limits. These temperatures are the ranges ABOVE freezing (32 F or 0 C). The damage that this type of injury causes most often occurs with tropical or sub-tropical plants grown in the U.S., but can also happen to native plants. 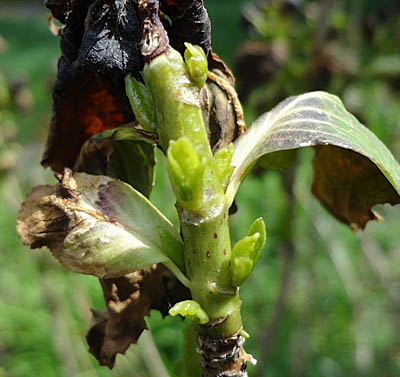 Damage and new growth on Hydrangea

Although most commonly seen in greenhouse-grown plants, outdoor plants such as hydrangeas and other fruiting and flowering trees and shrubs can also be affected, in both leaves and buds in development and those fully formed.

The effect of chilling injury is that the basic processes that allow a plant to grow and develop are interrupted, and the plant is unable to adapt quickly enough to keep all the necessary processes in balance. This results in visible damage (distortion, necrosis, shriveling within veins, spotting or color loss on leaves) or, more insidiously, lack of growth and delayed or diminished flowering and/or fruiting. This is because the basic cell structure has been interfered with and altered. Both above- (stems, foliage) and below-ground (roots) structures can be affected.

As awful as this sounds, it should be noted that this type of damage MOST frequently occurs in greenhouse-grown plants, because the grower is not appropriately monitoring the air and water temperatures to avoid such extremes. For home-gardeners, the biggest