How Many Legs Are Too Many 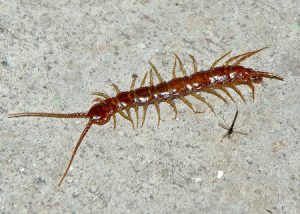 Centipedes do not have 100 legs, nor millipedes 1,000 legs. Now that these misconceptions are out of the way, let’s explore what these little crawlers are all about, and how many legs they actually have.

Both centipedes (Chilopoda class) and millipedes (Diplopoda class) are arthropods — related to lobsters, crayfish, and shrimp. They are invertebrates and not insects or bugs. They are known as metameric animals, meaning their bodies are divided into relatively identical segments. Humans have a similar repeating structure in the back bones of their spines. There are four orders of centipedes representing over 3,000 species throughout the world.

Millipedes usually have 40 to 400 legs, and centipedes have 30 to 50 legs and oddly, always have an odd number of pairs. Millipedes have cylindrical bodies, black or dark-colored, and move their legs in a wavelike undulation along their bodies. They are slow, but great for burrowing into the ground where they like to spend time. Eggs are laid in the soil in the spring. After hatching, the young grow, adding segments with each molt, and reaching maturity in about three to four years.

Centipedes have more flattened bodies, and move faster — a necessary trait to catch their food. Centipedes use their venomous jaws to capture and eat insects and other arthropods. They lay their eggs in spring and summer, and the development of their young is slow. Centipedes are relatively long-lived, sometimes living up to six years. 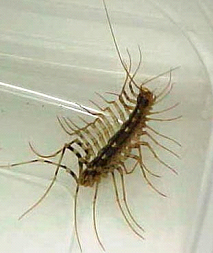 Both enjoy the dark, damp places found under leaf litter, rocks and brush. They overwinter outdoors in protected areas. One species, house centipedes (Scutigera coleoptrata), inhabit our indoor environments. They also prefer high humidity areas like basements, garages and laundry rooms and are a nuisance. Neither millipedes nor centipedes carry disease or damage food.

Are they dangerous? Millipedes protect themselves by coiling somewhat into smaller tighter spirals like pillbugs and secrete a form of cyanide from holes in their sides. The concentration is harmless to humans. Venom from centipedes in North America is not toxic enough to be deadly, but their bites can be like a wasp sting, causing an allergic reaction in some people. Their bites are not strong enough to penetrate human skin. There are some centipede species with unique color combinations used mostly as a warning to ward off predators.

Controlling the pests indoors by non-chemical means is simple. Just eliminate their favorite environments and food. Reduce humidity by drying out their hangouts, and eliminate hiding places by controlling the accumulation of storage boxes and clutter, and moving such items off the floor. Look for insects and spiders and eliminate them as well as ways they might enter your homes by ensuring windows, doors and cracks are sealed.

If millipedes and centipedes are making their way indoors, remove their favorite materials around the house perimeter. Clean and dry out mulches, pick up dead plant material and reduce damp hiding places to reduce their populations.

Indoor chemical treatments are usually temporary in their effectiveness. Pesticide dusts like boric acid powder applied to corners and crevices are the least toxic control means. However, remember that powders do not work well in areas that our pests prefer — damp and moist spaces.