Worm Your Way Out of Cabbage and Broccoli

By Ray Novitske, Fairfax Master Gardener
From Europe we import many fine wines, cheeses, chocolates, olive oil and truffles. Once in the later half of the 1800s, eastern Canada also accidentally imported a pest that spread throughout North America in later decades — the imported cabbage worm (Pieris rapae). Also known as the white cabbage butterfly, it is the caterpillar or larva phase of the insect that causes damage to cabbage… or broccoli, Brussels sprouts, Chinese cabbage, cauliflower, kale or collards. 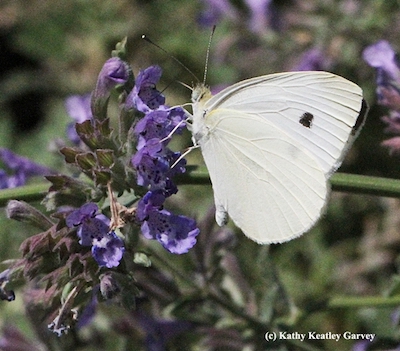 You have most likely seen the small white cabbage butterflies drifting among flowers in the spring and summer sipping on nectar. They are about 1 inch in size with white wings with a black spot on the wings, or two on females’ wings. They often get confused with other species similar in appearance to other cabbage white butterflies, like the Southern cabbage butterfly (checkered white wings) and the mustard white (green veined wings.) The larvae of both can cause similar damage, too.

Adults appear in mid-spring and begin by laying solitary eggs on the underside of cabbage leaves and other plants in the brassica or mustard family. They hatch in about a week. The caterpillars are green with one lighter stripe lengthwise down their backs. As soon as the eggs hatch, the little beasties begin munching their way through the leaves, leaving increasingly larger and larger holes as they mature. They prefer to hang out on the bottom of the leaves and are often concealed next to the veins or midrib on the underside of leaves.

Imported cabbage worms will pupate on any nearby materials or debris. After about a week, the butterfly emerges to fly from flower to flower and feed on nectar like other butterflies. There can be several generations in a season, which is why we always see them from spring, through the summer, until September. The pupae set in the fall will survive the winter with the butterflies emerging in the spring. 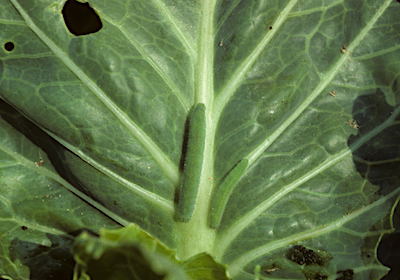 We are not helpless, as there are a few controls for such a pest. First, they can be physically removed from the underside of leaves, but sometimes they are hard to locate given their color and blending in with the plant’s leaf and leaf rib structure. We can use row covers to protect our plants and prevent the butterflies from laying eggs on our plants. It was also found that red cabbage is not as attractive to the egg-laying butterflies.

The caterpillars can be parasitized or preyed upon by biological enemies. There are parasitic wasps and tachinid flies that lay their eggs on the cabbage worms. A few lethal insect pathogens and viruses are known to attack both the worms’ eggs and larvae.

Bt, Bacillus thuringiensis is a bacteria that lives in soil and produces crystal-like toxic proteins that kill mostly caterpillars when eaten. It can be purchased in stores and comes in powder or liquid form. Its toxin paralyzes the insect’s digestive tract which causes it to stop feeding. Death occurs in one to four days. It does not harm mature insects or natural enemies, is not toxic to pets or animals and does not kill parasitoids. 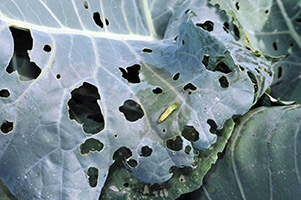 Bt does have some drawbacks. It has reduced toxicity on older more mature caterpillars, so we need to use it when the larvae are young. It also needs to be applied correctly so the caterpillars eat it; incomplete coverage can be a problem. It can break down in ultraviolet light quickly, making it effective for only a short period of time. Tests done at Ohio State University show that the rate (amount) of application had little bearing on test outcomes, while the frequency of application produced the most effective control. Reports from various sources indicate reapplication is needed every 6 to 10 days, but pesticide labels must be followed for applications.

I always see the imported cabbage worm on the cabbage (I love fresh cole slaw) and broccoli I grow. It is a very common pest of the cabbage family of plants, but it can be controlled in the home garden without the use of pesticides toxic to beneficial insects, animals, or us.