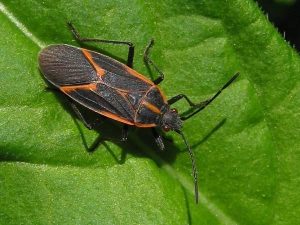 The boxelder bug (Boisea trivittata) is a true bug with piercing-sucking mouth parts that cause minor plant damage as they consume sap from leaves, stems and seeds. Adults are one-half inch long by one-third inch wide. Their bodies are black, edged and veined with red-orange. Nymphs are red. They are a pest of the boxelder, a fast-growing native tree usually found in river bottoms and wet soils. Because of its exceptional adaptability, boxelders have expanded their range into disturbed sites and urban areas. However, the bugs can be seen even with no boxelder trees nearby, since they also feed on other trees in the maple family, particularly silver maple and golden raintree. Additionally, since these bugs can fly up to 2 miles from their host plants, a swarm can occur without any of these trees nearby.

The boxelder bug breeds on female boxelder trees, laying red eggs in crevices in the bark and on the samaras (seeds). There are usually two generations per season, one in spring and one in early autumn. 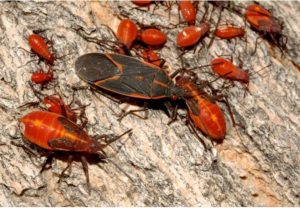 Boxelder bugs become problematic in the fall, when they begin searching for places to over-winter. Frequently the warmer southern or western exposure of a nearby house is found to be suitable, and hundreds will swarm there, seeking gaps in siding, under eaves and in tiny cracks leading inside. Even though they don’t harm the exterior (other than stains from fecal matter) or interior of the building