Your Soil — Beyond pH 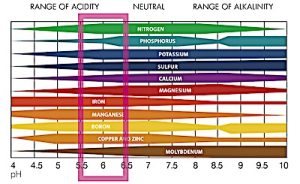 If you have your soil tested, the top line item reported back is your soil pH. This number represents how acidic or alkaline your soil is. Most gardeners know that some plants are considered acid-loving plants, while others prefer a more neutral soil or even alkaline soil. You may have even seen the chart showing how pH affects the absorption of key minerals necessary for plant health. As shown, a pH range between 5.5 and 6.5 provides the best range for absorption of these 11 key nutrients.

There are several questions the chart does not answer, however: What determines the pH of soil, and how does that affect what you can grow? In a nutshell, your soil pH is the result of the organic matter, minerals and microorganisms present in your soil, as well as soil disturbance or any chemicals that have been applied. Each garden, field, forest or grassland has a unique soil food web with a particular source of organic matter as well as a proportion of bacteria, fungi, microarthropods and other soil life. Soil disturbances from tilling or chemical application — including chemicals leaching from foundations and inorganic fertilizers that are high in salts — affect soil pH and fertility by killing the microorganisms that help build soil structure and fertility. 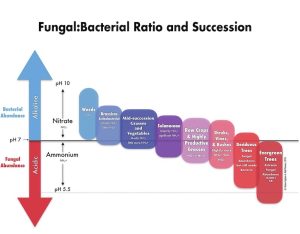 What you don’t see on the chart is the bacteria/fungi balance that occurs in nature, how it corresponds to soil pH, and ultimately, how that affects what will grow. For this you need to look at another chart, one created by Dr. Elaine Ingham, a world-renowned microbiologist and leading soil scientist, and Matt Powers, author and permaculture expert. Ingham places soil pH in the context of the role of the fungal:bacterial ratio and succession of nature from weeds through various crops to perennial shrubs, deciduous trees and eventually to evergreen forests.

The chart notes that annuals prefer more bacterial-abundant soils, which have a pH around 7 and above. You’ll often find lots of weeds in these more alkaline soils. Put in a different light, weeds are our pioneer species. They are super spreaders — either broadcasting seed far and wide or shooting their roots or rhizomes far and deep into the soil. They are super tough plants that can colonize these difficult soils, and in so doing, they prepare the soil for more desirable plants to follow. Many have long tap roots (think dandelion and such) that draw minerals from deep within the soil structure. They help to break up the soil, allowing deeper penetration of rain. They also help to build soil organic matter through their debris.

For gardeners, brassicas — broccoli, kale, mustard greens, cabbage and such — are the next stop in succession. These plants prefer more bacterial dominant soils, and even use actinomycetes, a large group of bacteria that grow as hyphae like fungi. These bacteria help degrade recalcitrant (hard-to-decompose) compounds, such as chitin and cellulose, to build fertility in the soil and transport soil nutrients. A few other bacteria also play a role in enhancing the soil. Nitrogen-fixing bacteria, such as those associated with the roots of legumes and some trees like alder and locust, convert nitrogen from the air into a form that plants can use, which is then stored in the soil. The next step in succession is triggered by nitrifying bacteria, which change ammonium to nitrate, a form that most grasses and garden plants prefer. Most vegetable gardens like a pH between 6.5 and 7.0.

As we staddle the line to a neutral pH, we find soil conditions to grow plants in the Solanaceae family, also called nightshade plants, such as tomatoes, cucumbers, potatoes, eggplant and green peppers. Row crops and highly productive grasses also thrive in a neutral pH, with a good balance between bacteria and fungi. Many of these grasses, such as corn and sorghum, are quite affective at building organic matter and sequestering carbon in the soil and set the stage for the next succession.

At this point we see the dominance shift to fungi, which form a vast network in the soil. They play an essential role in transporting vital nutrients to plants and trees and among them. Trees actively share extra nutrients through this network, helping to get resources where needed. The transition to fungal dominance sets the stage for succession from grassland and savannahs to deciduous forests and then to the evergreen forest, which has the most dense and active fungal network of all.

To put this in perspective, grasslands and agricultural soils usually have bacterial-dominated food webs; most of their biomass is in the form of bacteria. Highly productive soils for gardens and annual plants tend to have ratios of fungal to bacterial biomass around 1:1 or somewhat less. Forests tend to have fungal-dominated food webs. The ratio of fungal to bacterial biomass may be 5:1 to 10:1 in a deciduous forest and 100:1 to 1000:1 in a coniferous forest.

Here are approaches to build the health of your soil and affect its bacterial/fungal balance: