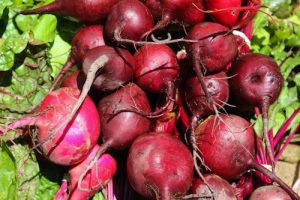 Beets (Beta vulgaris) have recently become more popular. Restaurants are now serving beets in varying colors of red and gold as part of a salad or as an ingredient in many other dishes. Beets can be traced back 4,000 years to the Mediterranean region. They were called blood turnips until the 1800’s. Today’s beets are much improved. They are easy to plant in your vegetable garden.

To grow beets, you need a light and loamy soil with a pH between 6.5 and 7.0. They also require even moisture while growing and dislike long, hot summer months. They can become tough and stringy in the heat and when dry. Beet seeds can be sown from March to early June, but earlier in the season is better, especially with the hot summers in our area. They can also be cultivated as a fall vegetable crop. First, apply a pre-plant fertilizer, since beets are heavy feeders. It is recommended that you sow your seeds directly into the soil. However, I have had success with starting beet seeds indoors under lights and then adding the transplants to my garden.

Beets need to be thinned when they are 2 to 3 inches in height. The greens that you remove can be used in salads. Thinning is necessary because a beet seed is actually a fruit or seed ball with several embryos. Even if you space them well, they will still need to be thinned. Beets should be planted in full sun and will be ready for harvest in 50 to 60 days. Pull the beet roots out carefully when they are 1 ½ to 3 inches in diameter. You can store them in the refrigerator or pickle them and store them in a jar.

Flea beetles and cercospora leaf spot may damage your beet greens. Use an organic treatment of kaolin clay or pyrethrin to treat them or simply remove the damaged leaves. You can also cover your beet crop with a floating row cover.

Popular cultivars of beets are ‘Bull’s Blood’ (an 1840 French variety), with its reddish-purple leaves; ‘Detroit Dark Red’ (developed from the early blood turnip in 1892),’ with downy mildew resistance; and ‘Golden Beet’ (dating back to 1820). Golden beets are ideal in kitchen preparation. When cutting red beets, protect your clothing, counter top and cutting board from the possible red staining. 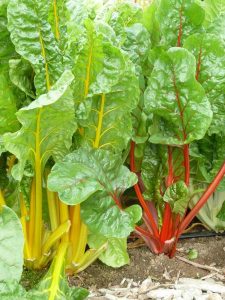 A close relative, Swiss chard
Swiss chard (Beta vulgaris var.cicla) is also known as silverbeet and spinach beet. Swiss chard was named to distinguish it from French spinach varieties by 19th century seed catalog publishers. It is not Swiss at all but has its origins in Sicily. Its greens are similar to those of beets, but without the root bulb. Swiss chard will produce greens for stir-fry dishes, soups or quiche throughout spring, early summer and fall. Small, young leaves can be used in salads. It doesn’t grow well in temperatures over 75 degrees.

Planting instructions for Swiss chard are similar to those for beets. It can be sown directly in your garden from early to mid-spring and again in the fall. Thin plants 8 to 12 inches apart in early summer. Plant in full sun or light, dappled shade. To harvest, clip leaves at the base of the plant. It will store in the refrigerator for two weeks and also freezes well. Flea beetles and cercospora leaf spot can also affect swiss chard. Slug bait may also be needed.

‘Lucullus,’ known for its large pale green leaves, is the most popular cultivar. ‘Rainbow’ will add color to your garden with its stalks of red, orange, pink, yellow and white. This year, I am trying a cultivar from Italy, ‘Barese,’ with green leaves and white stalks. It claims to be smaller, sweeter and more tender than the others.