By Joe Francis, Fairfax Master Gardener
Aster is a genus of flowering plants in the family Asteraceae. It is a very large family, and some taxonomic order on size control corralled this genus by geographic locations of its group species. The big winner and keeper of the name Aster went to some 180 species located in Eurasia. All good rules have exceptions, and the native species Aster alpinus spp. vierhapperi, found in North America, continues its listing in Asteraceae. It produces single stem inflorescences, can withstand -18.6F and needs 90 frost free days to flower with a strong preference for cool temperatures.

The other Aster subspecies found in North America were determined by morphologic and molecular research to be reclassified out of the Aster genus. They remain within the tribe Astereae. This sorting reclassified this group of eight asters into changed genera. The New England Aster, novae-angliae, and seven other Aster species are now catalogued in the genera Symphyotrichum. 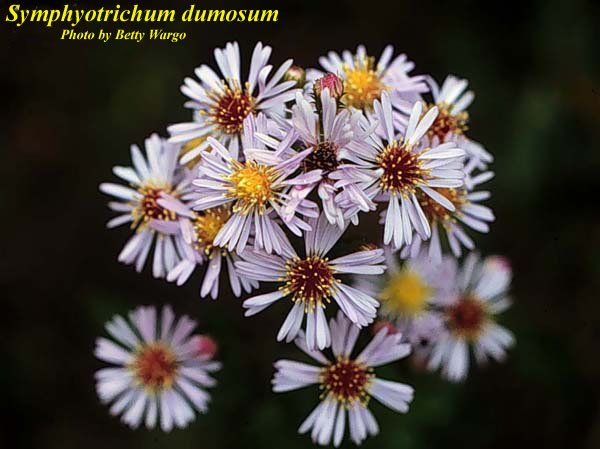 Symphyotrichum dumosum, common names rice button aster and bushy aster. Its height of 3 feet to 5 feet is managed by pinching before mid-July. There are five separate varieties in this species. They were moved into this distinct genus from New York aster, (Symphyotrichum novi-belgii), after phylogenetic analysis. The white variety is thought to have smaller flowers presented in a paniculiform array and to be bushy in appearance. It has a strong presence in Illinois. It prefers a moist environment with full sun to light shade.

Symphyotrichum ericoides, white heath aster, is 1 foot to 3 feet. Its leaves are sessile (stalk-less) and narrow. There are two varieties, v. ericiodes that spreads by underground rhizomes [invasive alert], and v. pansum, whose roots remain in the typical c