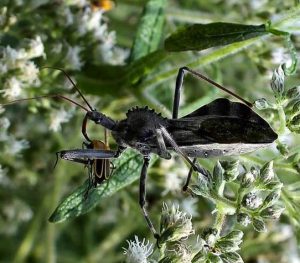 By Helen C. Hollingsworth, Fairfax Master Gardener
Assassin bugs are in the order Hemiptera, which include, among many others, leaf-footed bugs and stink bugs. Like all species in this order, they have piercing and sucking mouthparts, but unlike most others in the order, they have three-segmented beaks, which are held curved under their bodies. They have long, narrow bodies and long, narrow heads and can be colorful or camouflaged. Assassin bugs have a simple metamorphosis consisting of egg, nymph (which molts four to seven times) and adult. The eggs are barrel-shaped and tightly compacted together, in clusters from 10 to 40 per cluster. Most species overwinter in egg form, and nymphs are first seen hunting in May or June. They can fly but most are very weak fliers. Most are 1/2 inch to 3/4 inch long, but some can be up to 1-3/4 inch long. 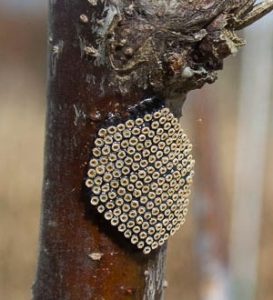 Assassin bugs are predators who actively hunt their prey amidst most types of vegetation, including weeds, herbaceous plants, shrubs and trees. Both the nymphs and adults hunt, using their “raptorial” front legs to grab the prey, then inject a small amount of venom. This paralyzes it, and the bug uses its beak to suck fluid out of the victim.

The role of assassin bugs as aggressive predators in the landscape is significant. They feed on a wide variety of pests including caterpillars (e.g. gypsy moth, eastern tent caterpillars, cankerworms, fall webworm), plant hoppers, sawfly larvae, aphids an