Springtime in the Iris Garden 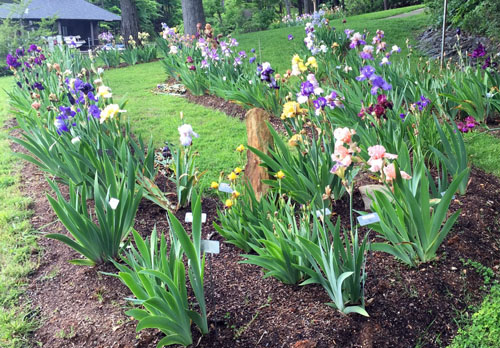 When March Madness is around the corner, I know it’s time to get back to my iris beds. There is work to be done. Spring is not the time to move irises, but there is other important work that needs my attention. Dead leaves, early weeds, ground cover: all need to be removed. Pre-emergent herbicide needs to be applied, and to ensure healthy blooming, fertilizer needs to be applied.

There are more than 250 species of iris in the genus Iris. My obsession with irises is fixated on bearded irises or Iris germanica. The American Iris Society classifies bearded irises into six groupings based on size: standard dwarf, miniature dwarf, intermediate, miniature tall, border and tall. They have different bloom times and a vast range of colors that live up to their namesake, the Greek Goddess of the rainbow.

By keeping my iris garden free of weeds and grass and dead leaves throughout the winter, I’ll have less work to do come springtime, and I reduce the chance of spreading disease and pests such as iris borer. It was an exceptionally wet winter so it’s also important to check for another common pest in irises, bacterial soft rot.

Irises are pretty hardy so even the cold temperatures we’ve had this winter are not likely to have bothered them much. But in cases where I put protective mulch on newly planted irises, I need to remove the winter protection promptly in the early spring when new foliage begins sprouting. Pine straw is among the best mulch to use because it lacks weed seed and doesn’t trap moisture around the rhizome. Smart gardeners avoid mulches such as leaves that trap moisture, as this environment can induce soft rot.

When I find rot, I treat it by scraping away the rotting tissue (I use an old spoon). Then I sprinkle the edges of the healthy rhizome with a cleanser like Comet or Ajax that dries out the wound and prevents the bacteria from re-infecting the rhizome. Virginia Cooperative Extension recommends a 10% bleach solution if you remove the rhizome and replant it. 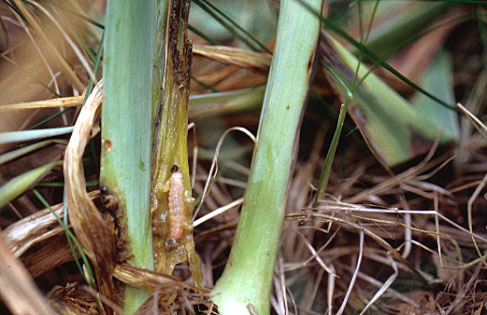 Also, I watch for signs of Iris borers, Macronoctua onusta, a problem more common in the eastern United States. The single most important step to take in avoiding borer problems is to do a very thorough cleanup well before the expected last frost, removing all withered foliage and debris. It is likely that eggs were laid on the brown, dried iris leaves and remained there through the winter. Eggs hatch when temperatures rise above 70°F, and young larvae feed on the surface of fresh new leaves before migrating down to the rhizome. If not caught soon enough, the borer can hollow out a rhizome and leave only the leaf fan. Taking away the dead leaves before eggs hatch goes a long way toward eliminating problems.

March Madness also reminds me it’s time to put down a pre-emergent herbicide on my flower beds. A chemical like Preen is effective against emerging weed seeds by forming a barrier against weed seed germination. What I like about this type of product is that it is non-persistent and won’t leach into ground water. 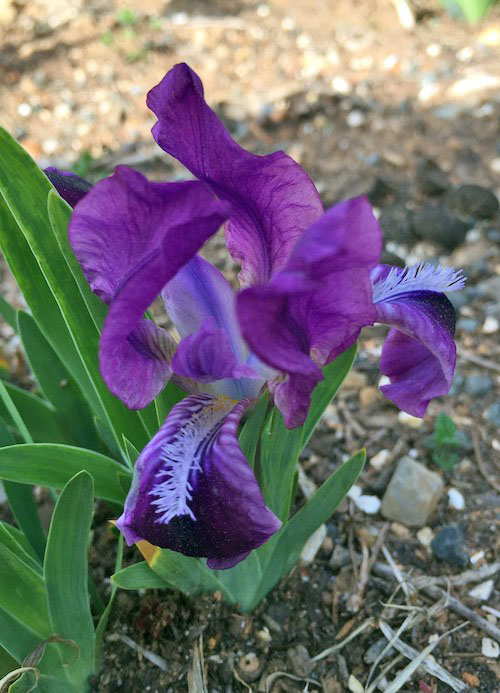 The other important task I plan for in anticipation of bloom season is fertilizing. A good rule of thumb: Apply iris fertilizer when the tulips are blooming in your neighborhood. The fertilizer blend should be a low nitrogen formula. There are three good blends: 6-24-24, 5-10-10, and 6-12-12. Provide a light application in early spring and again a month after bloom. Place fertilizer around rhizomes, not directly on them. Do NOT use Weed and Feed preparations.

I make sure to read manufacturers’ recommendations for my soil type, and I avoid using any fertilizer high in nitrogen, such as fresh manure. Too much nitrogen encourages rapid foliage production instead of blooms and can lead to rot.

Once my chores are done, I can look forward to the beginning of this year’s bloom season, starting with the iris that has always been my harbinger of Spring, a hardy little iris called ‘Atroviolacea,’ hybridized in 1856.